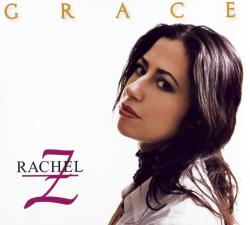 The album 'Grace' by Rachel Z

Born as Rachel Carmel Nicolazzo in New York City. In 1988 she joined the fusion band Steps Ahead, playing keyboards and piano and stayed with the band for eight years. In 1992, she recorded her debut solo album 'Trust The Universe'. The album featured a jazz A side with Charnette Moffett and Al Foster and an electric jazz B side with Lenny White and Victor Bailey.
She continued to release albums, including 'A Room Of One's Own' (1996), 'Love Is The Power' (1998) and 'On The Milkyway Express' (2000). In 1999 Rachel Z was a part of a jazz fusion project by Stanley Clarke and Lenny White. The effort, simply called Vertú, featured such artists as Karen Briggs on violin, Richie Kotzen on guitar. In 2002, she created a tribute album to Joni Mitchell called 'Moon at the Window'.

Intermittently, Rachel Z experimented with her own rock group Peacebox as a vocalist. During this time she was also working with the Neapolitan Italian pop legend Pino Daniele, with whom she first began working in 1996 and toured with until his death in 2016.

She also toured with Peter Gabriel during his Growing Up tours from 2002 to 2006, which gave Rachel the opportunity to widen her fan base and work with bassist Tony Levin. In 2005, she released the album 'Grace', which featured a cover version of This Woman's Work.

Rachel Z, a graduate of New England Conservatory of Music, is a Professor at the College for the Performing Arts New School University (Jazz and Contemporary Music Studies) since 2000.