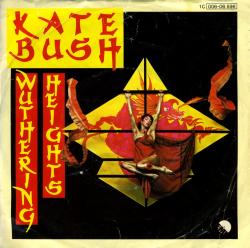 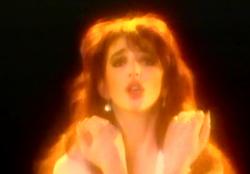 Still from the music video of 'Wuthering Heights' directed by Keef 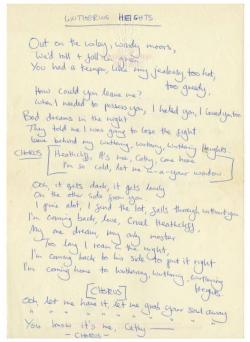 Song written by Kate Bush, released as her debut single in January 1978. She wrote the song after seeing the last ten minutes of the 1967 BBC mini-series based on the book ‘Wuthering Heights’, written by Emily Brontë. Reportedly, she wrote the song within the space of just a few hours late at night. The actual date of writing is estimated to be March 5, 1977.

Lyrically, "Wuthering Heights" uses several quotations from Catherine Earnshaw, most notably in the chorus - "Let me in! I'm so cold!" - as well as in the verses, with Catherine's confession to her servant of "bad dreams in the night." It is sung from Catherine's point of view, as she pleads at Heathcliff's window to be allowed in. This romantic scene takes a sinister turn if one has read Chapter 3 of the original book, as Catherine is in fact a ghost, calling lovingly to Heathcliff from beyond the grave. Catherine's "icy" ghost grabs the hand of the Narrator, Mr Lockwood, through the bedroom window, asking him to let her in, so she can be forgiven by her lover Heathcliff, and freed from her own personal purgatory.

The song was recorded with Andrew Powell producing. According to him, the vocal performance was done in one take, "a complete perfomance" with no overdubs. "There was no compiling," engineer Kelly said. “We started the mix at around midnight and Kate was there the whole time, encouraging us… we got on with the job and finished at about five or six that morning." The guitar solo that fades away with the track in the outro was recorded by Edinburgh musician Ian Bairnson, a session guitarist.

Originally, record company EMI's Bob Mercer had chosen another track, James And The Cold Gun as the lead single, but Kate Bush was determined that ‘Wuthering Heights’ would be her first release.  She won out eventually in a surprising show of determination for a young musician against a major record company, and this would not be the only time she took a stand against them to control her career.

The release date for the single was initially scheduled to be 4 November 1977. However, Bush was unhappy with the picture being used for the single's cover and insisted it be replaced. Some copies of the single had already been sent out to radio stations, but EMI relented and put back the single's launch until the New Year. Ultimately, this proved to be a wise choice, as the earlier release would have had to compete with Wings' latest release, ‘Mull of Kintyre’, which became the biggest-selling single in UK history up to this point in December 1977.

‘Wuthering Heights’ was finally released on 20 January 1978, was immediately playlisted by Capital Radio and entered their chart at no. 39 on 27 January. It crept into the national Top 50 in week ending 11 February at No.42. The following week it rose to No.27 and Bush made her first appearance on Top of the Pops ("It was like watching myself die", recalls Bush), The song was finally added to Radio One's playlist the following week and became one of the most played records on radio. When the song reached number 1, it was the first UK number 1 written and performed by a female artist.

‘Wuthering Heights’ was released as a 7” single worldwide. The B-side featured the song Kite. In the UK, there were two versions: in a custom EMI record company sleeve as well as a picture bag, featuring the ‘Kite’ design. This design was also used on several international releases. Other versions of the sleeve used photographs from a session with Gered Mankowitz.

Two music videos were created to accompany 'Wuthering Heights'. In one version, directed by Nick Abson, Kate dances on Salisbury Plain while wearing a red dress. It was filmed before the projected November 1977 release date. This version later inspired the Most Wuthering Heights Day.
In the second verison, directed by Keef, Kate can be seen performing the song in a dark room filled with white mist while wearing a white dress. According to Kate: “the video we made for 'Wuthering Heights' was probably amongst the first ever made, certainly here in this country in terms of a video, and I was very influenced at that time still by Lindsay Kemp. So it was very much the dance influence that I was expressing. So it was really working out choreography that would just look interesting, that would kind of create a persona of Cathy. “ (VH-1 interview, January 1990)

The music magazines in 1978 had different reactions to Kate's debut single. Record Mirror described the song as 'B-o-r-i-n-g', while Melody Maker wrote: 'The orchestration is ornate and densely packed, but never overflows its banks, Kate's extraordinary vocals skating in and out, over and above. (...) She turns the famous examination text by Emily Brontë into glorious soap opera trauma".

'Wuthering Heights' was sampled in tracks by DJ Isaac and The Good 2 Bad And The Hugly.

When I first read Wuthering Heights I thought the story was so strong. This young girl in an era when the female role was so inferior and she was coming out with this passionate, heavy stuff. Great subject matter for a song.
I loved writing it. It was a real challenge to precis the whole mood of a book into such a short piece of prose. Also when I was a child I was always called Cathy not Kate and I just found myself able to relate to her as a character. It's so important to put yourself in the role of the person in a song. There's no half measures. When I sing that song I am Cathy.
(Her face collapses back into smiles.) Gosh I sound so intense. Wuthering Heights is so important to me. It had to be the single. To me it was the only one. I had to fight off a few other people's opinions but in the end they agreed with me. I was amazed at the response though, truly overwhelmed.

I wrote in my flat, sitting at the upright piano one night in March at about midnight. There was a full moon and the curtains were open, and every time I looked up for ideas, I looked at the moon. Actually, it came quite easily. I couldn't seem to get out of the chorus - it had a really circular feel to it, which is why it repeats. I had originally written something more complicated, but I couldn't link it up, so I kept the first bit and repeated it. I was really pleased, because it was the first song I had written for a while, as I'd been busy rehearsing with the KT Band.
I felt a particular want to write it, and had wanted to write it for quite a while. I remember my brother John talking about the story, but I couldn't relate to it enough. So I borrowed the book and read a few pages, picking out a few lines. So I actually wrote the song before I had read the book right through. The name Cathy helped, and made it easier to project my own feelings of want for someone so much that you hate them. I could understand how Cathy felt.
It's funny, but I heard a radio programme about a woman who was writing a book in Old English, and she found she was using words she didn't know, but when she looked them up she found they were correct. A similar thing happened with 'Wuthering Heights': I put lines in the song that I found in the book when I read it later.
I've never been to Wuthering Heights, the place, though I would like to, and someone sent me a photo of where it's supposed to be.
One thing that really pleases me is the amount of positive feedback I've had from the song, though I've heard that the Bronte Society think it's a disgrace. A lot of people have read the book because of the song and liked it, which I think is the best thing about it for me. I didn't know the book would be on the GCE syllabus in the year I had the hit, but lots of people have written to say how the song helped them. I'm really happy about that.
There are a couple of synchronicities involved with the song. When Emily Bronte wrote the book she was in the terminal stages of consumption, and I had a bad cold when I wrote the song. Also, when I was in Canada I found out that Lindsay Kemp, my dance teacher, was in town, only ten minutes away by car, so I went to see him. When I came back I had this urge to switch on the TV - it was about one in the morning - because I knew the film of Wuthering Heights would be on. I tuned in to a thirties gangster film, then flicked through the channels, playing channel roulette, until I found it. I came in at the moment Cathy was dying, so that's all I saw of the film. It was an amazing coincidence.

Out on the wiley, windy moors
We'd roll and fall in green.
You had a temper like my jealousy:
Too hot, too greedy.
How could you leave me,
When I needed to possess you?
I hated you. I loved you, too.

Bad dreams in the night.
They told me I was going to lose the fight,
Leave behind my wuthering, wuthering
Wuthering Heights.

Ooh, it gets dark! It gets lonely,
On the other side from you.
I pine a lot. I find the lot
Falls through without you.
I'm coming back, love.
Cruel Heathcliff, my one dream,
My only master.