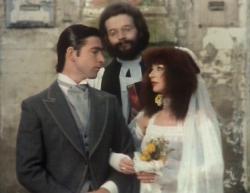 Song written by Kate Bush. The song was inspired by a François Truffaut's film called The Bride Wore Black ('La Mariée était en noir'). It tells of a groom who is accidentally murdered on the day of his wedding by a group of five people who shoot at him from a window. The bride succeeds in tracking down each one of the five and kills them in a row, including the last one who happens to be in jail.

The song was premiered during the Christmas Special in 1979. The studio recording was released on Kate's third album, Never For Ever, a little over eight months later.

The studio version is the only officially released version. However, a demo version of 'The Wedding List' has surfaced in recent years. Also, there is a live version from the Prince's Trust Rock Gala, which was released on a VHS video and Laserdisc of the gala.

Kate performed 'The Wedding List' on a Christmas Special in 1979 and during the Prince's Trust Rock Gala on July 21, 1982.

'The Wedding List' was covered by The Hounds Of Love.

'The Wedding List' is about the powerful force of revenge. An unhealthy energy which in this song proves to be a "killer". (Kate Bush Club newsletter, September 1980)

Revenge is so powerful and futile in the situation in the song. Instead of just one person being killed, it's three: her husband, the guy who did it - who was right on top of the wedding list with the silver plates - and her, because when she's done it, there's nothing left. All her ambition and purpose has all gone into that one guy. She's dead, there's nothing there. (Kris Needs, 'Fire in the Bush'. Zigzag, 1980)

Revenge is a terrible power, and the idea is to show that it's so strong that even at such a tragic time it's all she can think about. I find the whole aggression of human beings fascinating - how we are suddenly whipped up to such an extent that we can't see anything except that. Did you see the film Deathwish, and the way the audience reacted every time a mugger got shot? Terrible - though I cheered, myself. (Mike Nicholls, 'Among The Bushes'. Record Mirror, 1980)

No, I'll never give the hunt up
And I won't muck it up
Somehow this was it, I knew
Maybe fate wants you dead, too
We've come together in the very same room
And I'm coming for you!

Did you think I'd ever let you
Get away with it, huh?
He swooned in warm maroon
There's gas in your barrel, and I'm flooded with Doom
You've made a wake of our honeymoon
And I'm coming for you!

"All of the heaDLines said 'Passion Crime:
'Newlyweds Groom Shot Dead
'Mystery Man.' God help the bride!
She's a widow, all in red,
With his red still wet. She said--"

And when it's all over you'll roll over
The butt of my gun:
One in your belly, and one for Rudi.
You got what you gave by the heel of my bootie.
Bang-bang--Out! like an old cherootie,
And I'm coming for you!

"All of the heaDLines said 'Passion Crime:
'Newlyweds Groom Shot Dead
'Mystery Man.' God help the bride!
She's a widow, all in red,
With his red still wet. She said--"