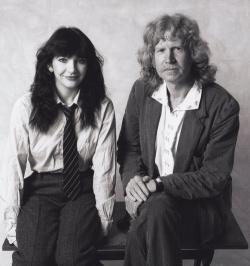 Eberhard Weber was born in Stuttgart (Germany) on 22 January 1940. He is a German double bassist and composer.

Weber began recording in the early 1960's. From the early 1960s to the early 1970s, Weber's closest musical association was with pianist Wolfgang Dauner. Their many mutual projects were diverse, from mainstream jazz to jazz-rock fusion to avant-garde sound experiments. During this period, Weber also played and recorded with pianists Hampton Hawes and Mal Waldron, guitarists Baden Powell de Aquino and Joe Pass, The Mike Gibbs Orchestra, violinist Stephane Grappelli, and many others. In 1973, Weber released 'The Colours of Chloë', his first record under his own name. After this, he formed his own group Colours, with Charlie Mariano, Rainer Brüninghaus and Jon Christensen. After their first album, 'Yellow Fields' (1975), Christensen left and was replaced by John Marshall. The group toured extensively and recorded two further records, 'Silent Feet' (1977) and 'Little Movements' (1980), before disbanding.

In the early 1980's, Weber started working with Kate Bush. He appeared on The Dreaming, Hounds Of Love, The Sensual World and Aerial. Meanwhile, he toured with Barbara Thompson's jazz ensemble Paraphernalia. In addition to his career as a musician, he also worked for many years as a television and theater director. He has designed an electric-acoustic bass with an additional string tuned to C.

In 2007, Weber suffered a stroke and was subsequently unable to perform. Weber was awarded the prestigious Albert Mangelsdorff-Preis in November 2009. A box set of his 1970's works was released by ECM Records the same month.