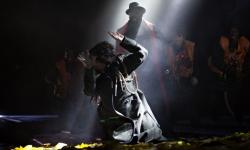 In 2014, Kate performed 'Waking The Witch' live during all the shows of Before The Dawn.

'Waking The Witch' was covered by Big City Orchestre, The Sandman's Orchestra, TM Collective and Violet.

Kate about 'Waking The Witch'

These sort of visitors come to wake them up, to bring them out of this dream so that they don't drown. My mother's in there, my father, my brothers Paddy and John, Brian Tench - the guy that mixed the album with us - is in there, Del is in there, Robbie Coltrane does one of the voices. It was just trying to get lots of different characters and all the ways that people wake you up, like you know, you sorta fall asleep at your desk at school and the teacher says "Wake up child, pay attention!". (...) I couldn't get a helicopter anywhere and in the end I asked permission to use the helicopter from The Wall from The Floyd, it was the best helicopter I'd heard for years for years [laughs].
I think it's very interesting the whole concept of witch-hunting and the fear of women's power. In a way it's very sexist behavior, and I feel that female intuition and instincts are very strong, and are still put down, really. And in this song, this women is being persecuted by the witch-hunter and the whole jury, although she's committed no crime, and they're trying to push her under the water to see if she'll sink or float. (Richard Skinner, 'Classic Albums interview: Hounds Of Love. Radio 1 (UK), aired 26 January 1992)

"Help this blackbird!"
"I am responsible for your actions."
"Oh-hoh-hoh!"

"Help this blackbird!"
"Wake the witch!"