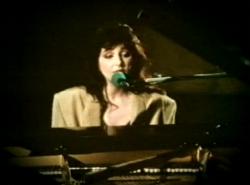 Song written by Kate Bush. Originally released as the B-side of the single Running Up That Hill in 1985.

Kate performed 'Under The Ivy' on television just once. It was a live performance of the song, with Kate singing and playing the grand piano at Abbey Road Studios in London, broadcast on 19 March 1986 in the 100th episode of The Tube.

Kate about 'Under The Ivy'

'Under The Ivy' we did in our studio in just an afternoon. (Peter Swales, 'Kate Bush'. Musician, Fall 1985)

It's very much a song about someone who is sneaking away from a party to meet someone elusively, secretly, and to possibly make love with them, or just to communicate, but it's secret, and it's something they used to do and that they won't be able to do again. It's about a nostalgic, revisited moment. (...) I think it's sad because it's about someone who is recalling a moment when perhaps they used to do it when they were innocent and when they were children, and it's something that they're having to sneak away to do privately now as adults. (Doug Alan interview, 20 November 1985)

I needed a track to put on the B-Side of the single Running Up That Hill so I wrote this song really quickly. As it was just a simple piano/vocal, it was easy to record. I performed a version of the song that was filmed at Abbey Road Studios for a TV show which was popular at the time, called The Tube. It was hosted by Jools Holland and Paula Yates. I find Paula’s introduction to the song very touching.
It was filmed in Studio One at Abbey Rd. An enormous room used for recording large orchestras, choirs, film scores, etc. It has a vertiginously high ceiling and sometimes when I was working in Studio Two,  a technician, who was a good friend, would take me up above the ceiling of Studio One. We had to climb through a hatch onto the catwalk where we would then crawl across and watch the orchestras working away, completely unaware of the couple of devils hovering in the clouds, way above their heads!  I used to love doing this - the acoustics were heavenly at that scary height.  We used to toy with the idea of bungee jumping from the hatch. (KateBush.com, February 2019)

It wouldn't take me long
To tell you how to find it,
To tell you where we'll meet
This little girl inside me
Is retreating to her favourite place

I sit here in the thunder,
The green on the grey
I feel it all around me
And it's not easy for me
To give away a secret
It's not safe,