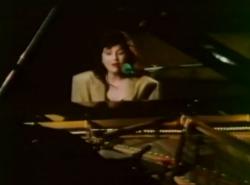 The Tube was a United Kingdom music television programme, which ran for five series, from 5 November 1982 to 26 April 1987. It was produced by Tyne Tees Television for Channel 4, which had previously produced the similar music show 'Alright Now' and the music-oriented youth show Check it out for ITV. Production of the latter ended in favour of The Tube.

Kate performed Under The Ivy live at Abbey Road Studios in London, broadcast on 19 March 1986 in the 100th episode of The Tube.