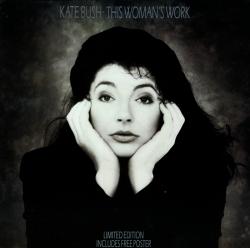 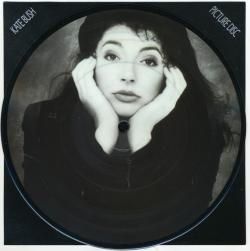 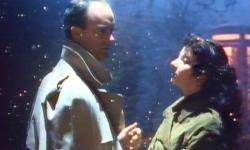 Still from the music video for 'This Woman's Work'

Song written by Kate Bush. Originally released on the soundtrack of the movie She's Having A Baby in 1988. A year later, the song was included in Kate's sixth studio album The Sensual World. The lyric is about being forced to confront an unexpected and frightening crisis during the normal event of childbirth. Written for the movie She's Having a Baby, director John Hughes used the song during the film's dramatic climax, when Jake (Kevin Bacon) learns that the lives of his wife (Elizabeth McGovern) and their unborn child are in danger. As the song plays, we see a montage sequence of flashbacks showing the couple in happier times, intercut with shots of him waiting for news of Elizabeth and their baby's condition. Bush wrote the song specifically for the sequence, writing from a man's (Jake's) viewpoint and matching the words to the visuals which had already been filmed.

'This Woman's Work' was released as a 7" single, a 7" picture disc single, a 12" single (with poster sleeve), a cassette single and a CD-single. In Germany, a 3" CD-single was also released. On all formats, the bonus track Be Kind To My Mistakes was included, plus - on all formats except the 7" singles and the cassette single - I'm Still Waiting.

There are four different versions of 'This Woman's Work'. The original version was released on the soundtrack album of the movie 'She's Having A Baby'. The version of the song that was featured on 'The Sensual World' was re-edited from the original version. The version released as a single was a third, slightly different mix.
Finally, 'This Woman's Work' was completely re-recorded on Kate's 2011 album Director's Cut. The new version features a sparse performance of Bush playing the piano and singing.

The music video was directed by Bush herself. It starts with Bush, spotlighted in an otherwise black room, playing the introductory notes on a piano. In the next scene, a distraught man (played by Tim McInnerny) is pacing in the waiting room of a hospital. It is then revealed through flashbacks that his wife (played by Bush) has collapsed while they were having dinner. The story blurs into a continuous scene where he carries her to the car, a desperate race to the hospital, and his wife being wheeled away on a stretcher as he races in behind her. While waiting, the husband is wracked with fear and imagines his wife in happier times, kissing him in the rain, and even imagines the nurse coming to tell him she has died. The nurse then pulls him out of his reverie, as she reassuringly puts her hand on his shoulder and tells him about his wife's situation, the outcome of this is left ambiguous; yet the nurse is seen smiling as she speaks, implying a happy outcome. The final scene of the video returns to Bush as silently closes the piano keyboard.

Kate about 'This Woman's Work'

John Hughes, the American film director, had just made this film called 'She's Having A Baby', and he had a scene in the film that he wanted a song to go with. And the film's very light: it's a lovely comedy. His films are very human, and it's just about this young guy - falls in love with a girl, marries her. He's still very much a kid. She gets pregnant, and it's all still very light and child-like until she's just about to have the baby and the nurse comes up to him and says it's a in a breech position and they don't know what the situation will be. So, while she's in the operating room, he has so sit and wait in the waiting room and it's a very powerful piece of film where he's just sitting, thinking; and this is actually the moment in the film where he has to grow up. He has no choice. There he is, he's not a kid any more; you can see he's in a very grown-up situation. And he starts, in his head, going back to the times they were together. There are clips of film of them laughing together and doing up their flat and all this kind of thing. And it was such a powerful visual: it's one of the quickest songs I've ever written. It was so easy to write. We had the piece of footage on video, so we plugged it up so that I could actually watch the monitor while I was sitting at the piano and I just wrote the song to these visuals. It was almost a matter of telling the story, and it was a lovely thing to do: I really enjoyed doing it. (Roger Scott Interview, BBC Radio 1 (UK), 14 October 1989)

That's the sequence I had to write the song about, and it's really very moving, him in the waiting room, having flashbacks of his wife and him going for walks, decorating... It's exploring his sadness and guilt: suddenly it's the point where he has to grow up. He'd been such a wally up to this point. (Len Brown, 'In The Realm Of The Senses'. NME (UK), 7 October 1989)

There's a film called 'She's Having A Baby'. And John Hughes, the director, rung up and said that he had a sequence in the film that he really wanted a song written to be with. And I'd only worked the once before on the 'Castaway' film - where I'd really enjoyed that - so I was extremely tempted by the offer. And when he sent the piece of film that the song was going to be part of, I just thought it was wonderful, it was so moving, a very moving piece of film. And in a way, there was a sense that the whole film built up to this moment. And it was a very easy song to write. It was very quick. And just kind of came, like a lot of songs do. Even if you struggle for months, in the end, they just kind of go - BLAH! - You know. [Laughs]. So that was the first song that I wrote for 'The Sensual World' album. In fact at the time we weren't even sure whether to put it on the album or not. And I must say that Del was very instrumental in saying that I should put it on the album, and I'm very glad I did. Because I had the most fantastic response - in some ways, maybe the greatest response - to this song. And I was really - I was absolutely thrilled, that you felt that way about it. (Kate Bush Con, 1990)

Pray God you can cope
I stand outside this woman's work,
This woman's world
Ooh, it's hard on the man,
Now his part is over
Now starts the craft of the father

Oh, darling, make it go,
Make it go away