There Goes A Tenner 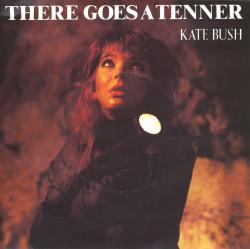 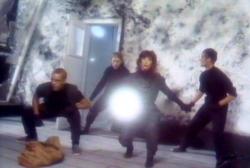 Still from the music video for 'There Goes A Tenner'

Song written by Kate Bush. Originally released on her fourth album The Dreaming, it was also released as a single on 2 November 1982. The song's lyrics are about a bungled bank robbery as told by a fearful and paranoid perpetrator. Towards the end of the song, the lyrics and tone take on a dream-like state, which is reflected in the video.

'There Goes A Tenner' was released as a 7" single in the UK and Ireland only, featuring Ne T'enfuis Pas on the B-side. It was originally intended to be Bush's first 12" single, but its disappointing sales performance caused plans for the 12" to be cancelled.

The music video was directed by Paul Henry and depicted Kate Bush as part of a gang of thieves robbing a bank.

Reviews of the single weren't all favourable. Record Mirror noted: "Blackheath beauty goes all cooey cockney-gasp in a bouncy tale of the downfall of Thatcherism and the rise of mass working class solidarity... actually it's more trivial than that." Record Business noted: "A practically formless song with odd vocal affections, and no chorus to speak of. (...) Most disappointing." Neil Tennant wrote in Smash Hits: "Very weird... Obviously she's trying to become less accessible. Even so this has a haunting atmosphere."

'There goes a tenner' was covered by Big City Orchestre,  Goodknight Productions, J. Davis Trio, The Kate Bush Experience and Optiganally Yours.

Kate about 'There Goes A Tenner'

It's about amateur robbers who have only done small things, and this is quite a big robbery that they've been planning for months, and when it actually starts happening, they start freaking out. They're really scared, and they're so aware of the fact that something could go wrong that they just freaked out, and paranoid and want to go home. (...) It's sort of all the films I've seen with robberies in, the crooks have always been incredibly in control and calm, and I always thought that if I ever did a robbery, I'd be really scared, you know, I'd be really worried. So I thought I'm sure that's a much more human point of view. (The Dreaming interview, CBAK 4011 CD)

That was written on the piano. I had an idea for the tune and just knocked out the chords for the first verse. The words and everything just came together. It was quite a struggle from there on to try to keep things together. The lyrics are quite difficult on that one, because there are a lot of words in quite a short space of time. They had to be phrased right and everything. That was very difficult. Actually the writing went hand-in-hand with the CS-80. (John Diliberto, Interview. Keyboard/Totally Wired/Songwriter (USA), 1985)

My excitement
Turns into fright
All my words fade
What am I gonna say?
Mustn't give the game away

We got the job sussed
This shop's shut for business
The lookout has parked the car,
But kept the engine running
Three beeps means trouble's coming

Both my partners
Act like actors:
You are Bogart
He is George Raft
That leaves Cagney and me

Ooh, I remember
That rich, windy weather
When you would carry me
Pockets floating
In the breeze

Ooh, there goes a tenner
Hey, look! There's a fiver
There's a ten-shilling note
Remember them?
That's when we used to vote for him