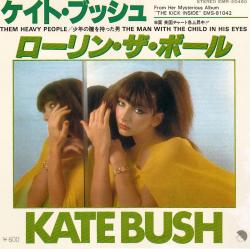 Song written by Kate Bush, released on Kate's debut album The Kick Inside. The song is about religion, and the teachings of Jesus and George Gurdjieff, among others. The song expresses an insistent desire to learn as much as possible, while she is still young.

A live version of 'Them Heavy People' was the lead track on the On Stage EP, released in 1979, and this live version came with a music video.

'Them Heavy People' was released as a single in Japan only. This single featured The Man With The Child In His Eyes on the B-side. A Seiko logo appears on the insert's back side, which makes it Bush's only commercial release featuring any kind of product endorsement. A live recording of this song was the lead track on the On Stage EP.

Bush performed 'Them Heavy People' on several TV programmes, including her only appearance on Saturday Night Live in the USA and the 1979 Christmas special.

'Them Heavy People' was covered by Jason Ajemian,  The Hounds Of Love, Niki Romijn and Ray Shell.

Kate about 'Them Heavy People'

The idea for 'Heavy People' came when I was just sitting one day in my parents' house. I heard the phrase "Rolling the ball" in my head, and I thought that it would be a good way to start a song, so I ran in to the piano and played it and got the chords down. I then worked on it from there. It has lots of different people and ideas and things like that in it, and they came to me amazingly easily - it was a bit like 'Oh England', because in a way so much of it was what was happening at home at the time. My brother and my father were very much involved in talking about Gurdjieff and whirling Dervishes, and I was really getting into it, too. It was just like plucking out a bit of that and putting it into something that rhymed. And it happened so easily - in a way, too easily. I say that because normally it's difficult to get it all to happen at once, but sometimes it does, and that can seem sort of wrong. Usually you have to work hard for things to happen, but it seems that the better you get at them the more likely you are to do something that is good without any effort. And because of that it's always a surprise when something comes easily. I thought it was important not to be narrow-minded just because we talked about Gurdjieff. I knew that I didn't mean his system was the only way, and that was why it was important to include whirling Dervishes and Jesus, because they are strong, too. Anyway, in the long run, although somebody might be into all of them, it's really you that does it - they're just the vehicle to get you there.
I always felt that 'Heavy People' should be a single, but I just had a feeling that it shouldn't be a second single, although a lot of people wanted that. Maybe that's why I had the feeling - because it was to happen a little later, and in fact I never really liked the album version much because it should be quite loose, you know: it's a very human song. And I think, in fact, every time I do it, it gets even looser. I've danced and sung that song so many times now, but it's still like a hymn to me when I sing it. I do sometimes get bored with the actual words I'm singing, but the meaning I put into them is still a comfort. It's like a prayer, and it reminds me of direction. And it can't help but help me when I'm singing those words. Subconsciously they must go in. (Kate Bush Club newsletter number 3, November 1979)

They arrived at an inconvenient time
I was hiding in a room in my mind
They made me look at myself; I saw it well
I'd shut the people out of my life

So now I take the opportunities:
Wonderful teachers ready to teach me
I must work on my mind. For now I realise:
Everyone of us has a heaven inside

They open doorways that I thought were shut for good
They read me Gurdjieff and Jesu
They build up my body, break me emotionally
It's nearly killing me, but what a lovely feeling!

I love the whirling of the dervishes
I love the beauty of rare innocence
You don't need no crystal ball,
Don't fall for a magic wand
We humans got it all, we perform the miracles