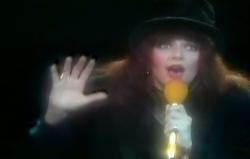 'Strange Phenomena' was released as a single (in Brazil only) on a 4 track EP called '4 Succesos' in June 1979, also featuring the songs Wow, Symphony In Blue and Hammer Horror.

There are two officially released versions of 'L'amour Looks Something Like You': the studio album and the live version from Hammersmith Odeon. However, a demo version from 1977 has also surfaced and was released on various bootleg cd's.

['Strange Phenomena' is] all about the coincidences that happen to all of us all of the time. Like maybe you're listening to the radio and a certain thing will come up, you go outside and it will happen again. It's just how similar things seem to attract together, like the saying ``birds of a feather flock together'' and how these things do happen to us all the time. Just strange coincidences that we're only occasionally aware of. And maybe you'll think how strange that is, but it happens all the time. (Self Portrait, 1978)

"Strange Phenomena'' is about how coincidences cluster together. We can all recall instances when we have been thinking about a particular person and then have met a mutual friend who - totally unprompted - will begin talking about that person. That's a very basic way of explaining what I mean, but these ``clusters of coincidence'' occur all the time. We are surrounded by strange phenomena, but very few people are aware of it. Most take it as being part of everyday life. (Music Talk, 1978)

Soon it will be the phase of the moon
When people tune in.
Every girl knows about the punctual blues,
But who's to know the power behind our moves?

A day of coincidence with the radio,
And a word that won't go away.
We know what they're all going to say.
"G" arrives--"Funny, had a feeling he was on his way!"

You pick up a paper. You read a name.
You go out. It turns up again and again.
You bump into a friend you haven't seen for a long time,
Then into another you only thought about last night.

You hear your sister calling for you,
But you don't know where from.
You know there's something wrong,
But you don't want to believe in a premonition.