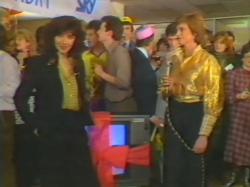 Kate Bush at the opening ceremony for Sky Channel, 16 January 1984

Sky One started on 26 April 1982 as Satellite Television Ltd, and was Europe's first ever cable and satellite channel, originally broadcasting from the Orbital Test Satellite aimed at cable operators all over the continent. At first the station struggled financially, due to disappointing ratings in the countries in which it was officially available, which in turn led to insufficient advertising revenue and increasing difficulty in covering the high transmission costs.

On 27 June 1983, the shareholders of Satellite Television agreed a £5 million offer to give News International 65% of the company. Murdoch extended the broadcast hours and the number of countries the station broadcast to including the United Kingdom. On 16 January 1984 the channel was renamed Sky Channel, and officially 'opened' by Kate Bush during a celebration in Swindon. This brief ceremony was televised on various news programmes in the UK the next day.

Sky Channel incorporated a large number of American imports in its schedules, while also increased the quantity produced of home grown programmes, including a number of new music programmes with Gary Davies, Tony Blackburn, Linda de Mol, Pat Sharp, David "Kid" Jensen, and Anthea Turner presenting programmes such as Euro Top 40, and UK Top 50 Chart. New children's programmes like Fun Factory and The DJ Kat Show, many of which came not only from Sky's own studios in London (having already abandoned the Molinare facilities by then), but also included programmes produced in the Netherlands by John de Mol's production company.

On 8 June 1988, Murdoch announced his plans to expand Sky's service to four channels, thus creating the Sky Television network. On 5 February 1989, the Sky Television Network (Sky Channel, Sky News, Sky Movies and Eurosport) was launched, At the same time, prime-time broadcasts to European cable operators ended, being replaced by Eurosport, a joint venture between Sky and the European Broadcasting Union, and aimed at a pan-European audience (like Sky Channel had been up to that point).