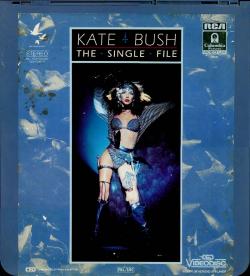 Collection of music videos by Kate Bush. It contains all of her music videos from Wuthering Heights to There Goes A Tenner. The video compilation was originally slated for release in April 1983, but was then put back until June 1983. In the end, the video was released at the end of November. There was a strong poster campaign in London in support of this release. Three personal appearances were planned in co-operation with retailer WH Smith: 7 December 1983 in Cardiff, 8 December 1983 in Kingston-upon-Thames and 9 December 1983 in London's Holborn Kingsway. The first one was aborted when Kate missed the train to Cardiff and then got on another one heading in the wrong direction. Fortunately the other two went ahead as planned.

'The Single File' was released on Betamax and VHS video, CED disc, and later on Laserdisc.

Tony Mitchell wrote in Sounds: "It's impossible not to be impressed by the magnitude of her talent, especially insofar as she was able, from the start, to make riveting videos with just herself, her songs and some slinky costumes and props". Mick Wall added in Kerrang!: "This collection oozes class from every visible orifice. Bush is the angel, there to lead you to heaven...". Video Review commented: "Kate appearing in various guises... choosing to rely on talent rather than than unnecessary props. All the obligatory trappings that are normally associated with rock videos seem redundant."