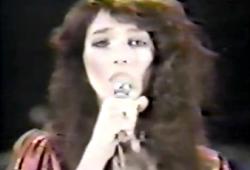 Song written by John Lennon and Paul McCartney. Originally released on the Beatles' 1967 album 'Sgt. Pepper's Lonely Hearts Club Band'. McCartney wrote and sang the verse and Lennon the chorus. The song was performed entirely by a small string orchestra arranged by Mike Leander, and was one of only a handful of Beatles songs in which the members did not play any instruments on the recording.

During a promotional visit to Japan, Kate Bush performed five songs on television: Moving, Them Heavy People, She's Leaving Home, The Long And Winding Road and Let It Be. These performances have all been attributed to the show 'Sound in S', 23 June 1978, but they may in fact have been performed for various different TV programmes.

She goes downstairs to the kitchen
Clutching her handkerchief
Quietly turning the backdoor key
Stepping outside, she is free