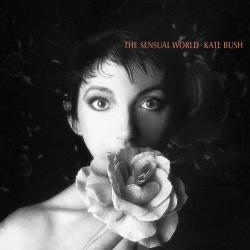 Sixth album by Kate Bush, released by EMI Records on 16 October 1989. The album was written, composed and produced by Kate.

As with Hounds of Love, the album was recorded mainly in Kate's home studio, after it was upgraded, adding an SSL console. Kate said she felt "overwhelmed by the amount of equipment aroud me. It was quite stifling, and I made a conscious effort to move away from that, and treat the song as the song."

Del Palmer was her principal engineer, and they often worked together on the new album, with Haydn Bertall appearing now and again. Three tracks on the album feature backing vocals by the Trio Bulgarka. The title track was inspired by James Joyce's book Ulysses, specifically the closing passage of the novel by Molly Bloom. When the estate refused the use of that text, Kate wrote her own which echos the original passage, but adds a dimension: 'Stepping out of the page / into the sensual world'.

The album was originally released on LP, CD, tape and MiniDisc.
The album was also included in the This Woman's Work box set in 1990.
In 2005, a so-called 'mini LP replica' version was released on CD in Japan.
In 2010, Audio Fidelity released 'The Sensual World' on vinyl with new remastering by Steve Hoffman and Kevin Gray.
In 2011, the album was first released on the Fish People label.

Many reviews of 'The Sensual World' were positive. Chris Roberts in Melody Maker wrote: "(...) Kate Bush's music emanates from a  grander reality, an inner truth... like all her best achievements, this album marries the physical honesty and self-pride of Marvin Gaye to the querying passionate intelligence of say Elizabeth Smart and gives birth to a rare mystical and aesthetic presence..." David Quantick in NME: "A strange and remarkable record which has very little to do with anything else musical, a fair bit to do with the real world of sex, love, and introversion, and everything to do with uniqueness. Kate Bush remains alone, ahead, and a genius." Billboard (USA): "Bush's strongest point has always been her ability to acutely sum up female sensuality without ever crossing the line between erotic and crass... this is some of the most intriguing ethereal music she has written."

Kate about 'The Sensual World'

Other people have said to me that they think this album is very dark, although for me I think it's my happiest album really. I find some of the tracks quite funny where other people say they find them scary. Although I have a dark sense of humour, maybe it is a subconscious thing that just goes into my music, because I think when I was writing this album that was perhaps something I was feeling a little - a sense of being a bit scared. Maybe it comes out in the music. I do think it's a very big self- therapy thing now - the more I work on an album the more I think it's almost a process for me to try and heal myself, have a look at myself. Do you know what I mean? Actually a very selfish thing in a way, but I think art is. I do think what artistic people are trying to do is work through their problems through their art - look at themselves, confront all these things. (...) It's not that the album is written about me, not that it is autobiographical, but it is the most direct process I've used for an album. It's in my own studio and I had a lot of time so as not to be under pressure by outside forces. I've recorded the whole album with Del so it's just myself and Del in a very close relationship working together very intensely and it was hard for me to write this album. To actually write the songs was very difficult, and for the first time really, I went through a patch where I just couldn't write - I didn't know what I wanted to say. (...) Everything seemed like rubbish - you know? It seemed to have no meaning whatsoever. Somehow I managed to get a sense of some meaningfulness, and that's why (...) to me now, albums are perhaps a way of helping myself, but maybe helping other people too. To work through my problems maybe will help other people too. To work through my problems maybe will help other people to work through their problems. Maybe the meaningfulness of art is that once you've got over your selfish work within it, you can give it to other people and hopefully it might at least make them smile or something. (Roger Scott, Interview. Radio 1 (UK), 14 October 1989)

I think this album for me, unlike the last album, say, Hounds of Love, where I saw that as two sides - one side being conceptual - this album is very much like short stories for me. Ten short stories that are just saying something different in each one and it was a bit like trying to paint the pictures accordingly. Each song has a different personality and so they each a need little bit of something here, a little bit of that there - just like people, you know, some people you can't walk up to because you know they're a bit edgy first thing in the morning. So you have to come up sideways to them, you know, and it's kind of like how the songs are too. They have their own little personalities, and if it doesn't want you to do it, it won't let you. (The VH-1 interview, January 1990)

I just felt that I was exploring my feminine energy more - musically. In the past I had wanted to emanate the kind of power that I've heard in male music. And I just felt maybe somewhere there is this female energy that's powerful. It's a subtle difference - male or female energy in art - but I think there is a difference: little things, like using the Trio. And possibly some of the attitudes to my lyric writing on this album. I would say it was more accepting of being a female somehow. (John Diliberto, 'Kate Bush's Theatre Of The Senses'. Musician, February 1990)