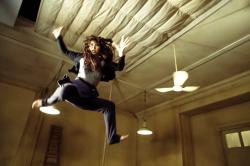 'Rubberband Girl' was released in the UK as a 7" single, a 12" single picture disc, a cassette single and a CD-single. In the USA, the single appeared on CD only. A cassette single was also released in Canada.
All formats feature the lead track and the B-side Big Stripey Lie. On the 12" single and some CD-singles, an extended mix of Rubberband Girl appeared. in the USA, the B-side was Show A Little Devotion instead of Big Stripey Lie.

There are four different versions of 'Rubberband Girl': the album version (which was also the single version) and an extended version, both released in September. A year later, a 'U.S. remix', credited to American DJ Eric Kupper, appeared as an extra track on the single release of And So Is Love. And in 2011, a re-recording of Rubberband Girl appeared on Bush's album Director's Cut.

Kate Bush actually recorded two different music videos for 'Rubberband Girl'. The original video was also used in the movie The Line, The Cross and The Curve and features Kate dancing in a studio. For the USA, a different video was shot with Kate wearing sunglasses and singing the track, with scenes from the movie intercut.

'Rubberband Girl' was covered by The Five Mod Four, Goodknight Productions, Göteborgs Symfoniker, The Hounds Of Love and Matches.

I thought the original 'Rubberband' was... Well, it's a fun track. I was quite happy with the original, but I just wanted to do something really different. It is my least favourite track. I had considered taking it off to be honest. Because it didn't feel quite as interesting as the other tracks. But I thought, at the same time, it was just a bit of fun and it felt like a good thing to go out with. It's just a silly pop song really, I loved Danny Thompson's bass on that, and of course Danny (McIntosh)'s guitar.  (Mojo (UK), 2011)