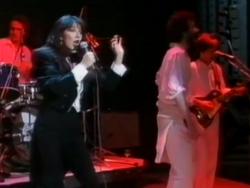 Revolver is a British music TV series on ITV that ran for one series of eight episodes only, in 1978. The series producer was Mickie Most, who was inspired to make the programme after he saw an interview with Top Of The Pops producer Robin Nash, in which he boasted that TOTP was a music programme that the whole family could enjoy together. Most set out to make a show which was the antithesis of that, and which featured live music performances most closely related to the then emergent punk rock and new wave music scenes.

The official host of the programme was Chris Hill, but it is remembered more for the contributions of Peter Cook. Cook played the manager of the fictional ballroom where the show was supposedly taking place, and frequently made disparaging remarks about the acts appearing. Revolver was recorded in front of a live audience in Birmingham, UK. Originally slated as a prime time show, Revolver was moved to a late night slot by ITV managers due to the controversial nature of punk at the time. Disappointing ratings meant that no second series was produced.

Kate Bush appeared in Revolver with a live version of Them Heavy People in Revolver, broadcast on 20 May 1978.