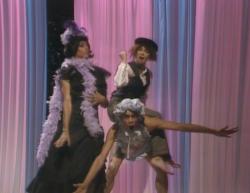 Song written by Kate Bush. The tone of the song is rather comic, while switching traditional gender roles. A young husband is left home holding the baby while the wife is out drinking and philandering. 'Ran Tan Waltz' was released as the B-side of the single Babooshka in June 1980.

The song was actually premiered during the Christmas Special in December 1979; the only performance of the song ever.