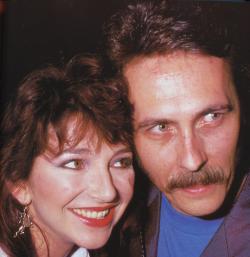 Born on 3 November 1952 in Greenwich, southeast London, Del Palmer is an English singer, songwriter, bass guitarist and sound engineer, best known for his work with Kate Bush, with whom he also had a long-term relationship between the late 1970s and early 1990s.

He began playing bass in 1967, joining friend Brian Bath's band Cobwebs and Strange. In 1969, Palmer and Bath formed Tame with Victor King on drums. The band lasted until 1970. From 1972, Palmer and Bath were in Company with Barry Sherlock (guitar) and Lionel Azulay (drums). They signed to Cube Records in 1973, but Azulay was injured in a road accident. Charlie Morgan joined on drums in 1974 and the band changed its name to Conkers. A series of singles followed on Cube.

In 1977, the KT Bush Band began with Bush, Palmer, Bath and Vic King, playing the pub circuit. Their live set included material that would later appear on Bush's first album.[9] Beginning with her second album, Lionheart, Palmer became Bush's main studio bassist. He also appeared on stage during the Tour of Life in 1979.

He is credited as an engineer on Kate Bush's Hounds of Love, The Sensual World, The Red Shoes and Aerial. He is also credited with engineering on three further albums involving Bush: Midge Ure's Answers to Nothing (where Palmer engineered her vocal guest recordings), Roy Harper's Once and Alan Stivell's Again. He played bass guitar on Lionheart, Never For Ever, The Dreaming, Hounds of Love, The Sensual World and Aerial (on 5 tracks) and on one track on 50 Words for Snow.

Palmer plays bass on Billy Sherwood's 'Back Against the Wall' and 'Return to the Dark Side of the Moon', both Pink Floyd tribute albums. He released his first solo album titled 'Leap of Faith' in 2007 with a follow up five-track EP titled 'Outtees & Alternatives' in 2008. That same year, Palmer did the mastering for Lionel Azulay's album 'Out of the Ashes', which includes the track 'Wouldn't Change a Thing' featuring Kate Bush. He originally engineered and mixed that track in 1990. He appeared in the BBC documentary Queens of British Pop discussing Kate Bush, and again in the BBC Four documentary The Kate Bush Story – Running Up That Hill. He released his second album entitled 'Gift' in 2010. His third album, 'Point of Safe Return', was released in March 2015.

Most of you will already know that I have been involved both as musician and recording engineer with Kate Bush for more than thirty years. It has been, from an artistic point of view, an incredibly fruitful liaison for me. I feel privileged to have had a front row seat to watch a true artist create so many musical masterpieces. (Del Palmer Biog, Del Palmer website)

My relationship with Del is very stable. We work together, we live together. It works so well for us. That can be a very intense set-up, but I wouldn't have it any other way. It's all very close and direct. After ten years, maybe we ought to be restless, but we're not. Some say the decade between 20 and 30 I very telling time in terms of human development, but I believe that the whole of life is like that. Del and I argue a great deal - over songs. But we consider it healthy. Who wins? Normally, I do. I'm not the shy, retiring, fragile butterfly creature sometimes read about. I'm tough as nails. (Under The Burning Bush, You Magazine (UK), 22 October 1989)