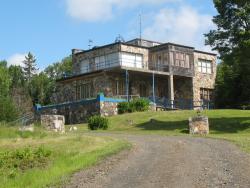 Orgonon was the 175-acre (71 ha) home, laboratory and research center of the Austrian-born psychiatrist Wilhelm Reich (1897–1957). Located west of the town center of Rangeley, Maine, and north of Rangeley Lake, the property includes two major buildings and two cabins. Its main building, designed by James B. Bell and built for Reich in 1948, is listed on the National Register of Historic Places (as the Orgone Research Laboratory), and is a significant example of International Style architecture in the state. The name is a play on orgone energy, Reich's principal area of study in his later years.

The main building is the Orgone Energy Observatory, and is where Reich did his research and had his office and library. It is a fieldstone structure, two stories high, with a flat roof. The roughly-centered entry leads into a hallway, with Reich's laboratory on the right and a suite of rooms on the left that included a kitchen, bathrooms, and playroom for Reich's son. The upper level, accessed by stairs at the back of the hall, included a bathroom, office, and living quarters. The walls are finished in knotty pine throughout, with plywood ceilings and vinyl flooring.

The property includes two cabins, which are seasonally available for rental. "Bunchberry", the smaller of the two, has two bedrooms, while "Tamarack" has three. Both have kitchens, and are in secluded settings somewhat apart from the main buildings. Tamarack was used by the Reichs as a residence, and the doctor stipulated that it should be made available to needy children. The trust managing the property donates use of this cabin for four weeks every summer to needy families.

Orgonon is Reich's burial place, and is now open to the public as the Wilhelm Reich Museum. It is referred to in Kate's song Cloudbusting, usually misspelled as Organon.