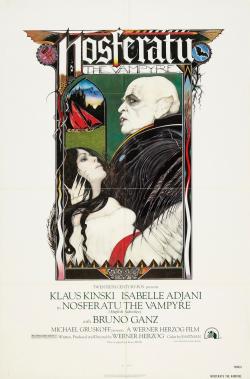 Film poster for 'Nosferatu The Vampyre'

Nosferatu the Vampyre is a 1979 West German art house vampire horror film written and directed by Werner Herzog. Its original German title is 'Nosferatu: Phantom der Nacht' ('Nosferatu: Phantom of the Night'). The film is set primarily in 19th-century Wismar, Germany and Transylvania, and was conceived as a stylistic remake of F.W. Murnau's silent film 'Nosferatu' (1922). It stars Klaus Kinski as Count Dracula, Isabelle Adjani as Lucy Harker, Bruno Ganz as Jonathan Harker, and French artist-writer Roland Topor as Renfield. There are two different versions of the film, one in which the actors speak English, and one in which they speak German.

Herzog's production of Nosferatu was very well received by critics and enjoyed a comfortable degree of commercial success. The film also marks the second of five collaborations between director Herzog and actor Kinski, immediately followed by 1979's 'Woyzeck'. The film had 1,000,000 admissions in West Germany. The film was also a modest success in Adjani's home country, taking in 933,533 admissions in France.

Kate borrowed a Georgian folk song called 'Zinzkaro' from this film for the choruses of the song Hello Earth.