Never For Ever [album] 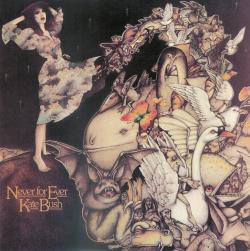 Never For Ever - album sleeve

Third album by Kate Bush, released by EMI Records on 5 September 1980. The album was produced by Kate Bush and Jon Kelly and recorded between September 1979 and May 1980. All the songs were written and composed by Kate.

The album was originally released on LP and tape. The LP was packaged in a gatefold sleeve, featuring the lyrics on the inner two sides.
In the second half of the Eighties, 'Never For Ever' was released on CD. The album was also included in the This Woman's Work box set, and in 2005, a so-called 'mini LP replica' version was released on CD in Japan.

The album was favourably received by music critics at the time, save for a curiously critical review in Record Mirror: "...one of the most empty dull packets of poop one could ever hope to avoid". Soundswas equally critical: "This album has been a long time in the making, but I'm not sure that this is always a good thing." Melody Maker was more enthusiastic: "Any doubts that this is the best Bush album yet are finally obliterated by the inspired unorthodoxy of the production. I had to look to see if Steve Lillywhite wasn't at the controls - it's that clean and fresh".

Kate about 'Never For Ever'

Now, after all this waiting it is here. It's strange when I think back to the first album. I thought it would never feel as new or as special again. This one has proved me wrong. It's been the most exciting. Its name is Never For Ever, and I've called it this because I've tried to make it reflective of all that happens to you and me. Life, love, hate, we are all transient. All things pass, neither good [n]or evil lasts. So we must tell our hearts that it is "never for ever", and be happy that it's like that!
The album cover has been beautifully created by Nick Price (you may remember that he designed the front of the Tour programme). On the cover of Never For Ever Nick takes us on an intricate journey of our emotions: inside gets outside, as we flood people and things with our desires and problems. These black and white thoughts, these bats and doves, freeze-framed in flight, swoop into the album and out of your hi-fis. Then it's for you to bring them to life. (Kate Bush Club newsletter, September 1980)

Each song has a very different personality, and so much of the production was allowing the songs to speak with their own voices - not for them to be used purely as objects to decorate with "buttons and bows". Choosing sounds is so like trying to be psychic, seeing into the future, looking in the "crystal ball of arrangements", "scattering a little bit of stardust", to quote the immortal words of the Troggs. Every time a musical vision comes true, it's like having my feet tickled. When it works, it helps me to feel a bit braver. Of course, it doesn't always work, but experiments and ideas in a studio are never wasted; they will always find a place sometime.
I never really felt like a producer, I just felt closer to my loves - felt good, free, although a little raw, and sometimes paranoia would pop up. But when working with emotion, which is what music is, really, it can be so unpredictable - the human element, that fire. But all my friends, the Jons, and now you will make all the pieces of the Never For Ever jigsaw slot together, and It will be born and It will begin Breathing. (Kate Bush Club newsletter, September 1980)

It's difficult to talk about the album without you actually hearing it, I suppose it's more like the first album, The Kick Inside, though, than the second, Lionheart, in that the songs are telling stories. I like to see things with a positive direction, because it makes it so much easier to communicate with the audience of listener. When you see people actually listening to the songs and getting into them, it makes you realise how important it is that they should actually be saying something. (...)
There are a lot of different songs. There's no specific theme, but they're saying a lot about freedom, which is very important to me. (Deanne Pearson, The Me Inside. Smash Hits (UK), May 1980)

For me, this was the first LP I'd made that I could sit back and listen to and really appreciate. I'm especially close to Never For Ever. It was the first step I'd taken in really controlling the sounds and being pleased with what was coming back. I was far more involved with the overall production, and so I had a lot more freedom and control, which was very rewarding. Favourite tracks? I guess I'd have to say 'Breathing' and 'The Infant Kiss'. (Women of Rock, 1984)

From here on there are big progressive steps. I was starting to take control at this point, making sure I had enough time and getting involved in production. (Love, Trust and Hitler. Tracks (UK), November 1989)