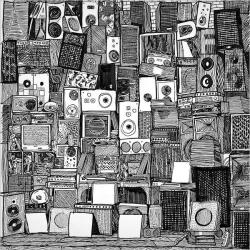 The album 'If I Had A Hi-Fi' by Nada Surf

Nada Surf was formed in 1992 by Matthew Caws and Daniel Lorca. They met in the Lycée Français de New York; both spent some of their childhood in France and Belgium, and played in many bands, including The Cost of Living and Because Because Because. After some live performances, a few 7" single releases and having worked with a few different drummers, they released their debut album 'High/Low' in 1996. That summer, as Nada Surf toured the United States with Superdrag, their song "Popular" became a summer anthem, and the band toured overseas.

In 1998, the band released their second album The Proximity Effect in Europe. The American record company required 'hit material', which meant they wanted the band to record several cover versions. The band judged the album was perfect as-is (even though Elektra suggested the inclusion of an acoustic version of 'Popular') and broke their contract. As a consequence, Elektra did not release the album in the US and dropped the band while they were on a promotional tour in Europe.

The band founded their own label MarDev and released 'The Proximity Effect' in 2000. Following the album's release, the band performed at their record release party at Luna Lounge in New York City and toured intensively for several months to rebuild their North American fan base. From 1999 to 2002, the band took regular day jobs: Caws worked at a Brooklyn record store called Earwax, Lorca worked on some computer projects and Elliot did drum and guitar session work for other artists. Caws later referred to these times as a period of luxury, and the record store job as his "favorite job ever."

Between 2002 and now, the band has released seven more albums and a compilation of rare tracks. Their 2010 album 'If I Had A Hi-Fi' included a cover version of Love And Anger. They continue to tour regularly.