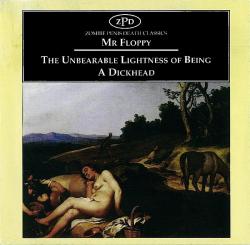 The album 'The Unbearable Lightness Of Being A Dickhead' by Mr. Floppy

Mr Floppy were an Australian alternative rock, punk rock and oi! band formed in 1989 by Tim Aylward on guitar (ex-The Swarm), Mick Carroll on guitar, Paul Johnson on bass guitar and vocals and Joseph Kennedy (ex-Pray TV) on drums in Ascot Vale, a suburb of Melbourne. The band's name comes the fourth and final series of the BBC sitcom Blackadder, Blackadder Goes Forth, "Mr Floppy" being one the Trinity College Tiddlywinkers mentioned by Lt George. They set up their own label, Zombie Penis Death, which was distributed by Waterfront Records. Before the release of their first single, Kennedy left the band and was replaced with a drum machine, dubbed "Bonecrusher Roland" by the band.

In July 1993 the band released their third and final album, 'The Unbearable Lightness of Being a Dickhead', which included two cover versions of Kate Bush's Wuthering Heights.

The band split up in 1994. Some of their final performances took place between 4 and 7 March of that year at Club O in Perth.