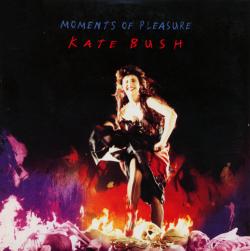 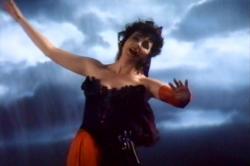 Still from the music video for 'Moments Of Pleasure'

Song written by Kate Bush. Premiered on television (see below) and officially released on her seventh album The Red Shoes. The song was subsequently also released as a single on 15 November 1993. Bush wrote the chorus "to those we love, to those who will survive" for her mother, who was sick at the time of recording. She died a short time later.

'Moments Of Pleasure' was released in the UK as cassette single, a 12" single with free poster, a regular CD-single and a limited edition box set CD-single with card prints. Although the single was not released commercially on 7" vinyl, copies do exist and were made exclusively for promotional and jukebox purposes.
The 7" single and the cassette single featured the instrumental version of 'Moments Of Pleasure' on the B-side. The 12" single added the track Home For Christmas. The CD-singles were different entirely and added, besides the title track, the tracks December Will Be Magic Again and Experiment IV. The non-limited version also had the track Show A Little Devotion.
Finally, there was also a Dutch 2 track CD-single, featuring Home For Christmas as the second track.

There are two different versions of 'Moments Of Pleasure': the album version (which was also the single version) from the 1993 album The Red Shoes. In 2011, a re-recording of the song appeared on Bush's album Director's Cut.

The music video was also used in the movie The Line, The Cross and The Curve and features Kate rotating around in the snow, lipsynching the song and meeting various actors near the end of the song.

Kate Bush premiered 'Moments Of Pleasure' during a rare TV appearance in the programme Aspel & Co on BBC television (UK) on 20 June 1993. She was interviewed by the host Michael Aspel, after which she performed the song on stage, sat behind a black grand piano.

Kate about 'Moments Of Pleasure'

I think the problem is that during [the recording of] that album there were a lot of unhappy things going on in my life, but when the songs were written none of that had really happened yet. I think a lot of people presume that particularly that song was written after my mother had died for instance, which wasn't so at all. There's a line in there that mentions a phrase that she used to say, 'every old sock meets an old shoe', and when I recorded it and played it to her she just thought it was hilarious! She couldn't stop laughing, she just thought it was so funny that I'd put it into this song. So I don't see it as a sad song. I think there's a sort of reflective quality, but I guess I think of it more as a celebration of life. (Interview with Ken Bruce, BBC Radio 2, 9 May 2011)

I wasn't really quite sure how "Moments of Pleasure" was going to come together, so I just sat down and tried to play it again-- I hadn't played it for about 20 years. I immediately wanted to get a sense of the fact that it was more of a narrative now than the original version; getting rid of the chorus sections somehow made it more of a narrative than a straightforward song. (Ryan Dombai, 'Kate Bush: The elusive art-rock originator on her time-travelling new LP, Director's Cut'. Pitchfork, May 16, 2011)

Hey there Maureen,
Hey there Bubba,
Dancing down the aisle of a plane,
'S Murph, playing his guitar refrain,
Hey there Teddy,
Spinning in the chair at Abbey Road,
Hey there Michael,
Do you really love me?
Hey there Bill,
Could you turn the lights up?