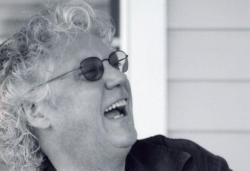 Bob Mercer was born in Preston, Lancashire on 17 October 1944. He graduated from the University of Manchester with a business degree in statistics. In the late 1960s he became product manager at General Foods in Britain, but he didn't quite fit in and was happy to be headhunted by EMI in 1972. He played an important part in the success of EMI Records throughout the 1970s. He oversaw the signings of big-selling acts such as Queen, Steve Harley & Cockney Rebel and Olivia Newton-John, and survived the fiasco of the Sex Pistols' controversial episode with the label. In the mid-1970s he renewed a long-term agreement with Pink Floyd, even if the group secured a separate deal with Columbia for the US only after 'The Dark Side of the Moon' album. Pink Floyd guitarist David Gilmour played him the three-song demo tape he had made with Bush at AIR Studios. Mercer was particularly taken with The Man with the Child in His Eyes and Saxophone Song. He put the then 17-year-old singer under contract, but also suggested she take time to develop further artistically. When eventually it was time to release a debut single, Mercer opted for James And The Cold Gun, but Kate insisted that it would be Wuthering Heights. Mercer gave in, and the rest was history. They remained in touch thereafter.

In 1980 Mercer went to work for a sister company, EMI Films. He briefly managed Paul McCartney and Roger Waters, one of the founders of Pink Floyd, and later worked with the comedians Mel Smith and Griff Rhys Jones, making advertisements and training films.

After moving to Nashville in the early 1990s he helped Jimmy Buffett set up Margaritaville Records, launched in 1993.

Since the mid-1970s Mercer had been aware of the commercial possibilities of compilation albums, something that record companies were slow to exploit; and he had hired a leading advertising agency to explore ways of promoting these albums on television. He returned to this side of the business as chief executive of 'Now That’s What I Call Music!', a venture which has sold 77 million compilation albums in the United States since 1998. The business was launched jointly by EMI and PolyGram, and in 1999 — after PolyGram was acquired by Universal — Mercer became senior vice-president of UTV Records. In this role he took the opportunity to set up New Door Records, a label featuring established artists such as the Temptations and Smokey Robinson.