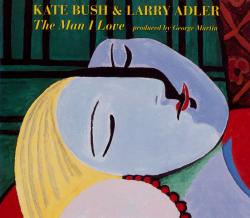 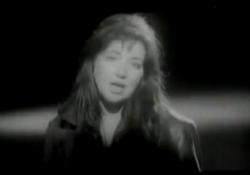 Still from the music video of 'The Man I Love'

Song written by George & Ira Gershwin. Originally written for the 1927 Fred and Adele Astaire musical, 'Lady Be Good'. The song received a lukewarm reception and was subsequently dropped from the 1930 version of the show. Lady Mountbatten came across the tune in America and she asked George Gershwin for an autographed copy that she could take back to England, prompting British dance bands to start playing the song. A few years later, a recording by torch singer Helen Morgan finally made the song a success in the US. Other artists who have covered it include Billie Holiday, Ella Fitzgerald and Barbra Streisand.

Kate Bush recorded a cover version of this song in 1994 for the album The Glory Of Gershwin, with Larry Adler on harmonica. The song was released as a single on 18 July 1994 in advance of the release of the album.

'The Man I Love' was released as a 7" single, a cassette single and various CD-singles. All formats featured the title track and an edit of 'Rhapsody In Blue' as performed by Larry Adler and George Martin, while some CD-singles added the full version of the latter track.

A black and white music video was filmed, with Kate singing the song and various musicians playing their parts. Larry Adler also appears in the video, playing his harmonica.

Kate about 'The Man I Love'

This romantic song was written by George and Ira Gershwin and when Larry Adler put an album together of their songs, called The Glory of Gershwin, he asked me to sing this beautiful song. The album was produced by George Martin. I was very fond of George - such a special talent and creative spirit, a really gentle man, very kind and incredibly interesting. It was a great honour to work with him and Larry.  George and Larry were very different personalities (Larry was a real character), but they made a great creative combination.
It was released as a single and Kevin Godley directed the video. I loved working with Kevin -  so imaginative and great fun. I’d worked with him and Lol Creme when they directed the video for Peter Gabriel’s song, Don’t Give Up. Kevin chose to present the video in a very traditional way which suited the song extremely well.  Godley and Creme are huge talents who left their mark not just in the music industry with their intelligence and wit in the band 10CC but also in the visual world with their groundbreaking videos, working with an impressive list of diverse artists.

Maybe I shall meet him
Sunday, maybe Monday, maybe not
Still I'm sure to meet him one day
Maybe Tuesday will be my good news day

He'll build a little home
Just meant for two
From which I'd never roam
Who would, would you?

Maybe I shall meet him
Sunday, maybe Monday, maybe not
Still I'm sure to meet him one day
Maybe Tuesday will be my good news day

He'll build a little home
Just meant for two
From which I'd never roam
Who would, would you?