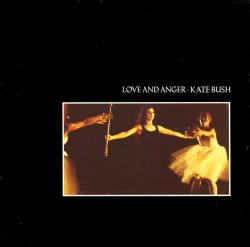 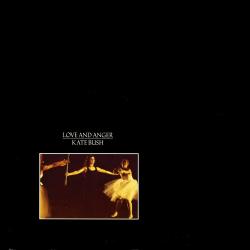 Still from the music video of 'Love and Anger'

Song written by Kate Bush. Originally released on her sixth studio album The Sensual World. It was one of the first tracks written for the album, but it came together in a period of two years, during which Kate herself had trouble understanding what the song was trying to say. The track features a guitar solo by David Gilmour.

'Love and Anger' was released as a 7" single (a limited edition run included a gatefold sleeve with a booklet of photos from the music video), a 12" single, a cassette single and a CD-single. On all formats, the bonus track Ken was included, plus - on all formats except the 7" singles and the cassette single - two instrumental tracks: One Last Look Around The House Before We Go and The Confrontation. All three songs were written for the episode GLC: The Carnage Continues... of the British TV programme The Comic Strip.

The music video was directed by Kate Bush. Basically a performance video, it features many dancers plus an appearance by the KT Bush band and David Gilmour.

Kate about 'Love and Anger'

This song! This bloody song!
It was one of the most difficult to put together, yet the first to be written. I came back to it 18 months later and pieced it together. It doesn't really have a story. It's just me trying to write a song, ha-ha.
Obviously the imagery you get as a child is very strong. This is about who you can or cannot confide in when there's something you can't talk about. "If you can't tell your sister, If you can't tell a priest..." Who did I have in the lyrics? Was it sister or mother? I can't remember. (Len Brown, 'In The Realm Of The Senses'. NME (UK), 7 October 1989)

It's one of the most difficult songs I think I've ever written. It was so elusive, and even today I don't like to talk about it, because I never really felt it let me know what it's about. It's just kind of a song that pulled itself together, and with a tremendous amount of encouragement from people around me. There were so many times I thought it would never get on the album. But I'm really pleased it did now. (Interview, WFNX Boston (USA), 1989)

I couldn't get the lyrics. They were one of the last things to do. I just couldn't find out what the song was about, though the tune was there. The first verse was always there, and that was the problem, because I'd already set some form of direction, but I couldn't follow through. I didn't know what I wanted to say at all. I guess I was just tying to make a song that was comforting, up tempo, and about how when things get really bad, it's alright really - "Don't worry old bean. Someone will come and help you out."
The song started with a piano, and Del put a straight rhythm down. Then we got the drummer, and it stayed like that for at least a year and a half. Then I thought maybe it could be okay, so we got Dave Gilmour in. This is actually one of the more difficult songs - everyone I asked to try and play something on this track had problems. It was one of those awful tracks where either everything would sound ordinary, really MOR, or people just couldn't come to terms with it. They'd ask me what it was about, but I didn't know because I hadn't written the lyrics. Dave was great - I think he gave me a bit of a foothold there, really. At least there was a guitar that made some sense. And John [Giblin] putting the bass on - that was very important. He was one of the few people brave enough to say that he actually liked the song. (Tony Horkins, 'What Katie Did Next'. International Musician, December 1989)

It lay buried here. It lay deep inside me.
It's so deep I don't think that I can speak about it.
It could take me all of my life,
But it would only take a moment to

Tell you what I'm feeling,
But I don't know if I'm ready yet.
You come walking into this room
Like you're walking into my arms.
What would I do without you?

To let go of these feelings
Like a bell to a Southerly wind?
We could be like two strings beating,
Speaking in sympathy...
What would we do without you?
Two strings speak in sympathy.

We're building a house of the future together.
(What would we do without you?)