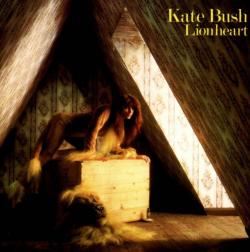 'Lionheart' is Kate Bush's second album, released by EMI Records on 10 November 1978. Like The Kick Inside before it, the album was produced by Andrew Powell. The album was recorded between July and September 1978, with all the songs written and composed by Kate.

Reception to the album has been average, with the album almost universally being looked upon as an inferior version of her debut. NME's Ian Penman wrote: "'Mature' lyrics sung in that twee irritating schoolgirl-siren voice... Actually most of the time she's nearer a vague British lineage - Barbara Dickson to Lynsey de Paul - than a Joni/Janis wonderland". Record Mirror's Chris Westwood: "A product which is at best moderate, lacking and often severely irritating... This is flat conceived silliness." However, Dave McCullough in Sounds gave the album four stars and wrote: "You have to take her seriously in spite of all the flying sneers and jeers."

Maybe I'm a bit too close to it at the moment, but I find it much more adventurous than the last one. I'm much more happier with the songs and the arrangements and the backing tracks. I was getting a bit worried about labels from that last album; everything being in the high register, everything being soft, and airy-fairy. That was great for the time but it's not really what I want to do now, or what I want to do, say, in the next year. I guess I want to get basically heavier in the sound sense... and I think that's on the way, which makes me really happy.
I don't really think there are any songs on the album that are as close to Wuthering Heights as there were on the last one. I mean, there's lots of songs people could draw comparisons with. I want the first single that comes out from this album to be reasonably up-tempo. That's the first thing I'm concerned with, because I want to break away from what has previously gone. I'm not pleased with being associated with such soft, romantic vibes, not for the first single anyway. If that happens again, that's what I will be to everyone. (Harry Doherty, Kate: Enigma Variations. Melody Maker, November 1978)

[Recording in France] was an amazing experience. I mean it's the first time I've ever recorded out of the country. And the environment was really quite phenomenal, I mean it was just so beautiful, it was so unlike anything I'd seen for a long while. And I think there was so many advantages to it, but there were a couple of disadvantages - the fact that it was so beautiful, you couldn't help but keep drifting off to the sun out there, you know, that sort of thing. But you just didn't feel like you needed a break, because the vibes and the weather and everyone around was just so good, you know, you didn't feel like you were working. It was really, really fun. (Lionheart Promo Cassette, EMI Canada, 1978)

It was a difficult situation because there was very little time around and I felt very squashed in by the lack of time and that's what I don't like, especially if it's concerning something as important for me as my songs are, they're really important to me. But it all seemed to come together and it was really nicely guided by something, it just happened great. And there were quite a few old songs that I managed to get the time to re-write. It's a much lighter level of work when you re-write a song because the basic inspiration is there, you just perfect upon it and that's great. And they're about four new songs so they all came together, it was great. In fact, we ended up with more then we needed again, which is fantastic. (Lionheart Promo Cassette, EMI Canada, 1978)

I had only a week after we got back from Japan to prepare for the album. I was lucky to get it together so quickly. But the songs seem to me, now, to be somewhat overproduced. I didn't put enough time into them. (Richard Laermer, Kate Bush Touches the U.S. At Last, Pulse!, 1984)

Even on the first two records, I was doing what I'm doing now as a artist, only because I was a lot younger, and I didn't have the room and the space to be able to truly present my music. I had to work with a producer and within certain kind of set-ups because of the fact that... that's how it was, I wasn't powerful enough basically to be able to say, ``Look, I'm producing this myself. This is what I do.'' And that's what I do now. I think that if I had been a little older, and if I'd had the experience at the time, I would have done it then, too. But I was - When I was making my first album, I was 18. I had never really worked with a band before, let alone a producer in a studio setup. So I just had - [Laughs] -I mean I just about had the guts, you know, to sing and keep it together. But you learn very quickly what you want. By the time the second album was finished, I knew that I had to be involved. Even though they were my songs and I was singing them, the finished product was not what I wanted. That wasn't the producer's fault. He was doing a good job from his point of view, making it sound good and together. But for me, it was not my album, really. (John Dilberto, Britain's Renaissance of Concept Rock, Keyboard, 1985)

It was rushed and that was responsible for me taking as much time as possible over albums. Considering how quickly we made it, it's a bloody good album but I'm not really happy with it. (John Aizlewood, Love, Trust and Hitler. Sounds (UK), November 1989)