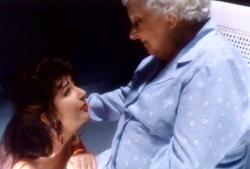 Still from the music video of 'Lily'

Song written by Kate Bush. Originally released on her seventh album The Red Shoes. The song is devoted to Lily Cornford, a noted spiritual healer in London with whom Bush became close friends in the 1990s. “She was one of those very rare people who are intelligent, intuitive and kind,” Kate has said of Cornford, who believed in mental colour healing—a process whereby patients would be restored to health by seeing various hues. “I was really moved by Lily and impressed with her strength and knowledge, so it led to a song - which she thought was hilarious.”

There are two versions of 'Lily': the album version from 1993, and the version from Bush's album Director's Cut in 2011. A live version appears on the album Before The Dawn.

A music video for 'Lily' exists, as part of the movie The Line, The Cross and The Curve.

The song was performed live as the first song during Kate's Before The Dawn shows in London, 2014.

'Lily' was covered by Goodknight Productions.

Oh thou, who givest sustenance to the universe
From whom all things proceed
To whom all things return
Unveil to us the face of the true spiritual sun
Hidden by a disc of golden light
That we may know the truth
And do our whole duty
As we journey to thy sacred feet

Well I said
"Lily, Oh Lily I don't feel safe
I feel that life has blown a great big hole
Through me"
And she said
"Child, you must protect yourself
I'll show you how with fire"

I said
"Lily, Oh Lily I'm so afraid
I fear I am walking in the Veil of Darkness"
And she said
"Child, take what I say
With a pinch of salt
And protect yourself with fire"