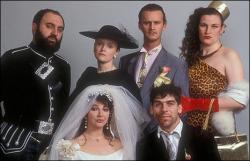 The cast of 'Les Dogs'

1990 television film written by Peter Richardson and Pete Richens, directed by Peter Richardson, and part of The Comic Strip Presents series of programmes. A wedding photographer becomes enraptured by a bride's beauty, and the story drifts into the surreal realm of his imagination. Kate made her acting debut in the role of bride Angela Watkins in this film; Miranda Richardson and Alexei Sayle portrayed Angela's parents, Tim McInnerny and Julie T. Wallace played her in-laws, and Danny Peacock earned the envy of millions in the role of her newlywed husband while Peter Richardson earned the further envy of millions as her lover.

Peter Richardson worked on the video [for The Sensual World] and it was a lot of fun, and we stayed in touch as friends. When he was working on The Comic Strip series, I got a script and he asked me if I'd play a part. I felt very honoured to be asked.