Kick Inside (the) [album] 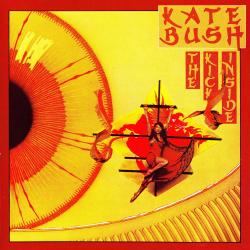 The Kick Inside' - UK album cover 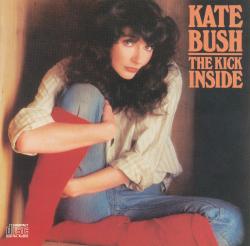 'The Kick Inside' - USA album cover 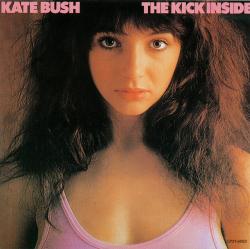 'The Kick Inside' - Japanese album cover

'The Kick Inside' is Kate Bush's debut album, released by EMI Records on 17 February 1978. The album was produced by David Gilmour's friend and associate, Andrew Powell and features 13 tracks. The album was recorded between June 1975 and August 1977, with all the songs written and composed by Kate.

As part of her preparation for entering the studio, Bush toured pubs with the KT Bush Band, supported by her brother Paddy and close friends. However, for the album she was persuaded to use established session musicians, some of whom she would retain even after she had brought her bandmates back on board. Paddy Bush was the only member of the KT Bush Band to play on 'The Kick Inside'.

The album was originally released on LP and tape.
Six different varieties of the album's cover are known; it is Kate Bush's only album to have a different cover in the UK, the USA, Canada, Yugoslavia, Japan and Uruguay, the last one being the rarest and most expensive.
In the UK, the album was released (twice) as a limited edition picture disc. This is housed in a full colour outer sleeve ('Kite' picture by Jay Myrdal). It sports a sticker declaring that it's a picture disc (cat. no: EMCP 3223). Two versions were actually released: The first edition has a circular sticker stating that it is a picture disc (usually in the top left hand corner). The second pressing (apparently aimed at the US market, where the first pressing had proven popular) has an oval sticker (usually top centre). The second disc also states "manufactured in the UK by EMI records Ltd." as part of the copyright notice printed on the disc. The first edition does not have this wording.
Also, there are versions of the LP in different colours of vinyl: in Holland, a version on grey vinyl was issued, and in Czechoslovakia there were versions in green, pink and multicoloured vinyl.
In Canada, the album was also released on 8-track cartridge.

In 1983, the first CD of 'The Kick Inside' was released in Japan. Three years later, there was also a European CD release. The album was also included in the This Woman's Work box set, and in 2005, a so-called 'mini LP replica' version was released on CD in Japan.

Kate about 'The Kick Inside'

Hello everyone. This is Kate Bush and I'm here with my new album The Kick Inside and I hope you enjoy it. The album is something that has not just suddenly happened. It's been years of work because since I was a kid, I've always been writing songs and it was really just collecting together all the best songs that I had and putting them on the album, really years of preparation and inspiration that got it together. As a girl, really, I've always been into words as a form of communication. And even at school I was really into poetry and English and it just seemed to turn into music with the lyrics, that you can make poetry go with music so well. That it can actually become something more than just words; it can become something special. (Self Portrait, 1978)

There are thirteen tracks on this album. When we were getting it together, one of the most important things that was on all our mind was, that because there were so many, we wanted to try and get as much variation as we could. To a certain extent, the actual songs allowed this because of the tempo changes, but there were certain songs that had to have a funky rhythm and there were others that had to be very subtle. I was very greatly helped by my producer and arranger Andrew Powell, who really is quite incredible at tuning in to my songs. We made sure that there was one of the tracks, just me and the piano, to, again, give the variation. We've got a rock 'n' roll number in there, which again was important. And all the others there are just really the moods of the songs set with instruments, which for me is the most important thing, because you can so often get a beautiful song, but the arrangements can completely spoil it - they have to really work together. (Self Portrait, 1978)

I think it went a bit over the top [In being orientally influenced], actually. We had the kite, and as there is a song on the album by that name, and as the kite is traditionally Oriental, we painted the dragon on. But I think the lettering was just a bit too much. On the whole I was surprised at the amount of control I actually had with the album production. Though I didn't choose the musicians. I thought they were terrific.
I was lucky to be able to express myself as much as I did, especially with this being a debut album. Andrew was really into working together, rather than pushing everyone around. I basically chose which tracks went on, put harmonies where I wanted them...
I was there throughout the entire mix. I feel that's very important. Ideally, I would like to learn enough of the technical side of things to be able to produce my own stuff eventually. (The Blossoming Ms. Bush, 1978)

As far as I know, it was mainly Andrew Powell who chose the musicians, he'd worked with them before and they were all sort of tied in with Alan Parsons. There was Stuart Elliot on drums, Ian Bairnson on guitar, David Paton on bass, and Duncan Mackay on electric keyboards. And, on that first album, I had no say, so I was very lucky really to be given such good musicians to start with. And they were lovely, 'cause they were all very concerned about what I thought of the treatment of each of the songs. And if I was unhappy with anything, they were more than willing to re-do their parts. So they were very concerned about what I thought, which was very nice. And they were really nice guys, eager to know what the songs were about and all that sort of thing. I don't honestly see how anyone can play with feeling unless you know what the song is about. You know, you might be feeling this really positive vibe, yet the song might be something weird and heavy and sad. So I think that's always been very important for me, to sit down and tell the musicians what the song is about. (Musician, 1985)

I think it was probably the least experimental of all the albums. I'd written, say, two hundred songs from which we chose the thirteen songs that went on that. And it was recorded very quickly, there was very little time for experimentation. It was something that had a lot of forethought gone into it. (Profile 6, 1985)