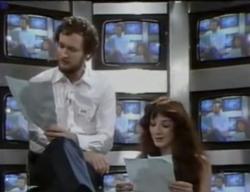 The Kenny Everett Video Show was a British television comedy and music programme made by Thames Television for ITV from 3 July 1978 to 21 May 1981. The show's format was conceived over lunch and a walk between producer David Mallet and Everett himself, having decided that they could not watch on television what they wanted to watch.

Originally, the Video Show consisted of Everett in the role of a visual DJ linking studio performances from bands, singers, and the show's resident dance troupe Hot Gossip, along with occasional sketches and Captain Kremmen cartoons. As the series grew in popularity, the linking material became longer and more varied - to such an extent that the final series, renamed The Kenny Everett Video Cassette, focused far more heavily on the comedy with just one musical guest per week.

The Video Show was also noteworthy in that the sketches were performed to the studio crew and technicians with their laughter heard on the finished programme, unlike Everett's later BBC series, The Kenny Everett Television Show, which used a live audience. Bloopers were often not edited out of sketches. Two pilot episodes were made, which are believed to no longer exist.

Initially, the series was produced at Thames' Euston Road headquarters in central London, recorded in small studios usually designated for news and current affairs programming. Production was later transferred to the much larger Teddington Studios.