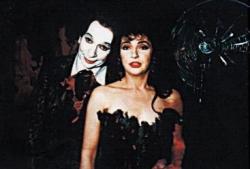 Lindsay Kemp and Kate Bush during filming of 'The Line, The Cross &amp; The Curve' 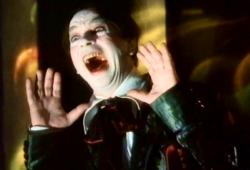 Lindsay Kemp in 'The Line, The Cross &amp; The Curve'

Born in Cheshire, England (UK) on 3 May 1938, Lindsay Kemp studied with Marcel Marceau in the 1950's before starting his own company in 1968. Kemp formed his own dance company in the early 1960's and first attracted attention with an appearance at the Edinburgh Festival in 1968. He crept into mainstream awareness because of his associations with his former pupils David Bowie and Kate Bush. His performances are a mix of mime, Kabuki, and oddball British comedy. He also made an appearance in the films 'The Wicker Man' (1973) and 'Sebastiane' (1976).

Kemp worked with Kate Bush on preparations for the Tour Of Life stage shows, and then made an appearance in her 1994 film 'The Line, The Cross & The Curve'. Kate's song Moving was dedicated to Lindsay Kemp.

His last public performance in the United Kingdom was a collaboration with singer songwriter Tim Arnold at Manchester's Bridgewater Hall in a multimedia live arts installation of Arnold's song 'What Love Would Want' in June 2018. Kate sent Lindsay flowers to congratulate him on the performance. He suddenly passed away in his home in Livorno (Italy) on 24 August 2018. David Haughton, his closest friend and collaborator for 45 years, said Kemp had remained busy and active right till the end, saying "he suddenly said he felt ill, and a minute and a half later he was gone."

I couldn't believe how strongly Lindsay communicates with people without even opening his mouth. It was incredible, he had the whole audience in his control, just with his little finger. And it was amazing. I'd never seen anything like it, I really hadn't. And I felt if it was possible to combine that strength of movement with the voice, then maybe it would work, and that's what I've tried to do. (Woman's Hour, BBC Radio 4 (UK), 21 February 1979)

Once I'd left school I tried to get into a dance school full-time, but no one would accept me as I had no qualifications in ballet. I had almost given up the idea of using dance as an extension of my music, until I met Lindsay Kemp, and that really did change so many of my ideas. He was the first person to actually give me some lessons in movement. I realized there was so much potential with using movement in songs, and I wanted to get a basic technique in order to be able to express myself fully. Lindsay has his own style - it's more like mime - and although he studied in many ballet schools and is technically qualified as a dancer, his classes and style are much more to do with letting go what's inside and expressing that. It doesn't matter if you haven't perfect technique. (Electronics & Music Maker, 1982)

To call him a mime artist is like calling Mozart a pianist. He was very brave, very funny and above all, astonishingly inspirational. There was no-one quite like Lindsay. I was incredibly lucky to study with him, work with him and spend time with him. I loved him very much and will miss him dearly. Thank you, dear Lindsay. (Lindsay Kemp, performer and Bowie mentor, dies at 80. BBC News, 25 August 2018.)