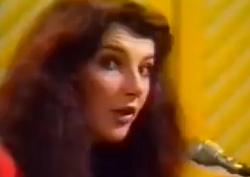 Song written by Kate Bush, dating back to 1976. It was released on Kate's second album Lionheart. The recording features Paddy Bush playing the strumento da porco.

The studio version is the only officially released version. However, a demo version of 'Kashka From Baghdad' has also surfaced. It appears on the bootleg 7" single 'Cathy Demos Volume Two' and various bootleg CD's.

Kate performed 'Kashka From Baghdad' live on the piano on Ask Aspel, a TV show broadcast by the BBC in 1978. The song was also included in the setlist for the Tour of Life.

'Kashka From Baghdad' was covered by the Plunging Necklines.

Kate about 'Kashka From Baghdad'

That actually came from a very strange American Detective series that I caught a couple of years ago, and there was a musical theme that they kept putting in. And they had an old house, in this particular thing, and it was just a very moody, pretty awful serious thing. And it just inspired the idea of this old house somewhere in Canada or America with two people in it that no-one knew anything about. And being a sorta small town, everybody wanted to know what everybody what else was up to. And these particular people in this house had a very private thing happening. (Personal Call, BBC Radio 1, 1979)

At night they're seen, laughing, loving
They know the way to be happy