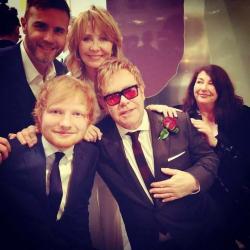 Sir Elton Hercules John CBE was born as Reginald Kenneth Dwight on 25 March 1947. With lyricist Bernie Taupin he collaborated on 30 albums to date. He has sold over 300 million records, making him one of the best-selling music artists in the world. He charted a Top 40 hit single every year between 1970 and 1996. His versatility, combined with his effortless melodic skills, dynamic charisma, and flamboyant stage shows, became his calling cards and many of his songs - including 'Your Song', 'Rocket Man', 'Goodbye Yellow Brick Road' and 'Don't Let the Sun Go Down on Me' - became contemporary pop standards.

He began playing piano at the age of four, and when he was 11, he won a scholarship to the Royal Academy of Music. After studying for six years, he left school with the intention of breaking into the music business. In 1961, he joined his first band, Bluesology, and divided his time between playing with the group, giving solo concerts at a local hotel, and running errands for a London publishing house. By 1965, Bluesology was backing touring American soul and R&B musicians like Major Lance, Doris Troy, and the Bluebells. In 1966, Bluesology became Long John Baldry's supporting band and began touring cabarets throughout England. Dwight became frustrated with Baldry's control of the band and began searching for other groups to join. He failed his lead vocalist auditions for both King Crimson and Gentle Giant before responding to an advertisement by Liberty Records. Though he failed his Liberty audition, he was given a stack of lyrics left with the label courtesy of Bernie Taupin, who had also replied to the ad. Dwight wrote music for Taupin's lyrics and began corresponding with him through mail. By the time the two met six months later, Dwight had changed his name to Elton John, taking his first name from Bluesology saxophonist Elton Dean and his last from John Baldry.

John and Taupin were hired by Dick James to become staff songwriters at his fledgling DJM in 1968. The pair collaborated at a rapid rate, with Taupin submitting batches of lyrics - he often wrote a song an hour - every few weeks. John would then write music without changing the words, sometimes completing the songs in under a half-hour. Over the next two years, the duo wrote songs for pop singers like Roger Cook and Lulu. In the meantime, John recorded cover versions of current hits for budget labels to be sold in supermarkets. By the summer of 1968, he had begun recording singles for release under his own name. In June 1969, he released his debut album for DJM, 'Empty Sky', which received fair reviews, but no sales.

His second album fared much better, propelled by the top 10 single 'You song'. From then on, his career took off. Throughout the 1970s, John's concerts were enormously popular, as were his singles and albums, and he continued to record and perform at a rapid pace until 1976. That year, he revealed in an interview in Rolling Stone that he was bisexual; he would later admit that the confession was a compromise, since he was afraid to reveal that he was homosexual. Subsequently he cut his performance schedule drastically, announcing that he was retiring from live performances in 1977, and started recording only one album a year. His relationship with Taupin became strained following the release of 1976's double album Blue Moves, and the lyricist began working with other musicians. He remained a popular concert artist, but his singles failed to break the Top Ten, even if they reached the Top 40.

It was 1983's 'Too Low for Zero' that began his last great streak of hit singles, with the MTV hit 'I'm Still Standing' and the Top Ten single 'I Guess That's Why They Call It the Blues'. Throughout the rest of the '80s, John's albums would consistently go gold, and they always generated at least one Top 40 single; frequently, they featured Top Ten singles like 'Sad Songs (Say So Much)' (1984), 'Nikita' (1986), 'Candle in the Wind' (1987), and 'I Don't Want to Go on with You Like That' (1988).
Following a record-breaking five-date stint at Madison Square Garden in 1988, John auctioned off all of his theatrical costumes, thousands of pieces of memorabilia, and his extensive record collection through Sotheby's. The auction was a symbolic turning point. Over the next two years, John battled both his drug addiction and bulimia, undergoing hair replacement surgery at the same time. By 1991 he was sober, and the following year he established the Elton John AIDS Foundation; he also announced that he would donate all royalties from his single sales to AIDS research.

When Princess Diana tragically died in 1997, Elton John re-recorded 'Candle in the Wind' (originally a eulogy for Marilyn Monroe) as a tribute to his slain friend, with Taupin adapting the lyrics for what was planned as the B-side of 'Something About the Way You Look Tonight'. With the profits earmarked for Diana's favorite charities, and with a debut performance at Diana's funeral, 'Candle in the Wind 1997' became the fastest-selling hit of all time in both Britain and the U.S. upon the single's release, easily debuting at number one on both sides of the Atlantic. It was John's biggest hit ever.

Kate Bush recorded a cover version of Rocket Man and Candle In The Wind for the tribute project Two Rooms in 1991. Then in 2011, they recorded the duet Snowed In At Wheeler Street for Kate's album 50 Words For Snow. In December 2014, Kate attended Elton John and his husband David Furnish's wedding lunch at their Windsor estate.

I did a duet with Kate Bush on this track for her last album. That session with her was hard, because she doesn't write easy songs. She's a complex songwriter and this is a weird song, but I love it so much. I'm so proud to be on a Kate Bush record; she's always marched to the beat of her own drum. She was groundbreaking – a bit like a female equivalent of Freddie Mercury. She does come out socially sometimes and she came to my civil partnership occasion with her husband. There were so many stars in the room, but all the musicians there were only interested in saying, "You've got to introduce me to Kate Bush." I remember Boy George saying, "Oh my God, is that Kate Bush?" I said, "Yeah!" (Leah Harper, Elton John: soundtrack of my life. The Guardian, 1 September 2013)