In The Warm Room 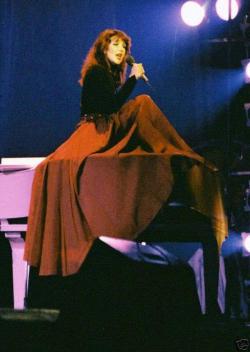 Kate Bush performing 'In The Warm Room' during the Tour of Life, 1979

Song written by Kate Bush. Originally released on her second album Lionheart, the song was written a few years before as a simple piano & vocal ballad.

Kate was asked to perform on the children's TV programme Ask Aspel, where she wanted to present the new song 'In The Warm Room', but the BBC felt this song was too explicitly sexual, so she opted for Kashka From Baghdad instead. As a result, there are no televised performances of 'In The Warm Room'. The song, however, was performed during the Tour of Life and one of these performances ended up in the Live In Germany TV special.

Kate about 'In The Warm Room'

I'm always getting accused of being a feminist. Really I do write a lot of my songs for men, actually. In fact, 'In The Warm Room' is written for men because there are so many songs for women about wonderful men that come up and chat you up when you're in the disco and I thought it would be nice to write a song for men about this amazing female. And I think that I am probably female-oriented with my songs because I'm a female and have very female emotions but I do try to aim a lot of the psychology, if you like, at men. (Personal Call, BBC Radio 1, 1979)

In the warm room
She's waiting in that warm room