In Search Of Peter Pan 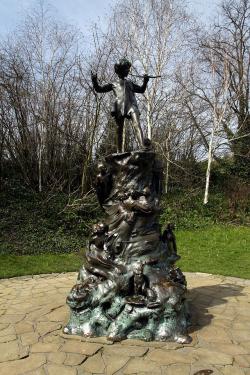 Found him! Statue of Peter Pan in Kensington Gardens, London.

Song written by Kate Bush before her debut in 1978. When the album Lionheart was recorded, it was one of seven 'older' songs to be recorded. The song quotes the song 'When You Wish Upon A Star' from the classic Disney film Pinocchio.

Kate performed 'In Search Of Peter Pan' as part of the live shows in the Tour of Life in 1979.

'In Search Of Peter Pan' was covered by Kat Devlin.

Kate about 'In Search Of Peter Pan'

There's a song on [Lionheart] called 'In Search Of Peter Pan' and it's sorta about childhood. And the book itself is an absolutely amazing observation on paternal attitudes and the relationships between the parents - how it's reflected on the children. And I think it's a really heavy subject, you know, how a young innocence mind can be just controlled, manipulated, and they don't necessarily want it to happen that way. And it's really just a song about that. (Lionheart promo cassette, EMI Canada, 1978)

When I am a man I will be an astronaut,
and find Peter Pan