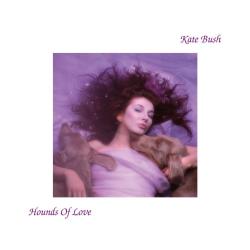 Cover of the album 'Hounds Of Love'

Fifth album by Kate Bush, released by EMI Records on 16 September 1985. Two years in the making, the album was written, composed and produced by Kate.

Following the disappointing performance of her fourth album The Dreaming and its singles, executives at Bush's label were concerned about sales largely due to the long time period it took to produce the album. In the summer of 1983 Bush built her own 48-track studio in the barn behind her family home which she could use to her advantage and at anytime she liked, without time constraints she had to deal with when hiring studios elsewhere.

With the studio more or less completed, Bush began recording demos for the album in the summer of 1983. After five months, Bush began overdubbing and mixing the album in a process that took a full year. The recording sessions included use of the Fairlight CMI synthesiser, piano, traditional Irish instruments, and layered vocals.

The album was produced as two suites - side one being 'Hounds of Love' and side two a seven-track concept piece called The Ninth Wave.

The album went to number 1 in the UK and stayed in the albums chart for over a year, making it her best selling album to date.

'Hounds Of Love' received critical acclaim on its release and in retrospective reviews. It is considered by many fans and music critics to be Bush's best album, and has been regularly voted one of the greatest albums of all time.
Ronnie Randall wrote in Sounds: "Dramatic moving, and wildly, unashamedly, beautifully romantic." Jane Solanas in NME added: "It's an obvious progression of the skill shown on The Dreaming." Colin Irwin, Melody Maker: "She's way out of sync with everything else that's going down right now... here she has learned you can have control without sacrificing passion". Dermot Stokes, The Hot Press: "Obviously and unarguably one of the more powerful intelligences of modern pop... but can all this profusion of talent be harnessed to produce The Work? Well by jasus, if this album isn't it, it's awful close... It's a very powerful and dare I say it, female album, and I'll be playing it longer than most."

The album was originally released on LP, CD and tape.
The album was also included in the This Woman's Work box set in 1990.
On 16 June 1997 a remastered version of the album was released as part of EMI's 'First Centenary' reissue series. This version included six bonus tracks: The Big Sky (Meteorological mix), Running Up That Hill (12" mix), Be Kind To My Mistakes, Under The Ivy, Burning Bridge and My Lagan Love.
In 2005, a so-called 'mini LP replica' version was released on CD in Japan.
In 2010, Audio Fidelity released Hounds Of Love on vinyl with new remastering by Steve Hoffman.

Kate about 'Hounds Of Love'

The title comes from one of the songs, which is entitled 'Hounds Of Love', and this album for me is like two quite separate pieces of work: the a-side and the b-side. The a-side is very much five individual songs that are in some way all linked by love as a theme, and this seemed to be a title which really did sum up that side. We actually gave a title to the b-side of the album as well, but because you can't have two titles for an album, so we just went for the a-side title to cover it all. (Tony Myatt interview, November 1985)

It's almost like two separate albums for me, this really, in that the first side is five separate songs, if they're linked it's only be the theme of love - they're all forms of love songs, they're about relationships. They're all very different subject matters from each other. And the second side of the album is a conceptual piece which is seven songs all linked together. And it's very much something that was designed and written to work as one piece of music. (Rockline (France), September 1985)

Many hours were spent on tiny vocal ideas that perhaps only last half a minute. Many hours went on writing lyrics - one of the most difficult parts in the process for me, in that it's so time-consuming and so frustrating, and it just always seems to take far too long for something that seems as though it should come so naturally. One of the difficult things about the lyrics is that when I initially write the song, perhaps half of the lyrics come with it but it's almost more difficult fitting in the other half to make it match than it would be perhaps to start from scratch, where, for instance, you might have just hummed the tune; or where, in some cases, I wrote them as instrumentals, and then the tunes were written over the top of this. Many times I ring up Paddy and ask him to come over to the studio immediately, to bring in that string-driven thing - to hit that note and let it float.
One of the most positive things is now having our own recording studio where we can experiment freely, and it's definitely one of the best decisions I've made since I've been recording albums. We've put a lot of hard work into this album, so we've been waiting for it to be finished and ready, and I know you've been waiting. I hope that after this time, and after all the snippets of information we've been giving you, you don't find it disappointing, but that you enjoy it, and that you enjoy listening to it in different ways again and again.
This album could never have happened without some very special people. Many thanks to Julian Mendelsohn, and especially Haydn Bendall and Brian Tench, who put a lot of hard work into this project, to all the musicians, who are a constant inspiration, to Ma who helps with every little thing, to Paddy and Jay for all their inspiration and influences, and again to Del for all those moments we've captured on tape together. (Kate Bush Club newsletter, 1985)

On this album I wanted to get away from the energy of the last one - at the time I was very unhappy, I felt that mankind was really screwing things up. Having expressed all that, I wanted this album to be different - a positive album, just as personal but more about the good things. A lot depends on how you feel at any given time - it all comes out in the music. (James Marck, 'Kate Bush Breaks Out: Bush's Bridges'. Now - Toronto Weekly, 28 November 1985)

The first in my own studio. Another step closer to getting the work as direct as possible. You cut all the crap, don't have all these people around and don't have expensive studio time mounting up. A clean way of working. ('Love, Trust and Hitler'. Tracks (UK), November 1989)

I never was so pleased to finish anything if my life. There were times I never thought it would be finished. It was just such a lot of work, all of it was so much work, you know, the lyrics, trying to piece the thing together. But I did love it, I did enjoy it and everyone that worked on the album was wonderful. And it was really, in some ways, I think, the happiest I've been when I'd been writing and making an album. And I know there's a big theory that goes 'round that you must suffer for your art, you know, ``it's not real art unless you suffer.'' And I don't believe this, because I think in some ways this is the most complete work that I've done, in some ways it is the best and I was the happiest that I'd been compared to making other albums. ('Classic Albums interview: Hounds Of Love, with Richard Skinner. BBC Radio 1 (UK), 26 January 1992)