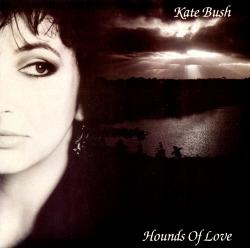 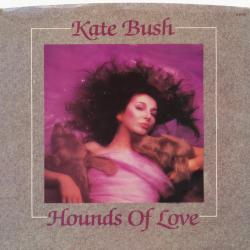 Song written by Kate Bush. Originally released on her fifth studio album Hounds Of Love. Also released as the third single from the album on 24 February 1986. The song is about being afraid to fall in love; in the song this feeling is compared to being chased by a pack of hounds. The intro features a quote from a line spoken in the film Night Of The Demon by Maurice Denham.

There are three different versions of 'Hounds Of Love': the album version. This version also appeared on the single, except in the US, where the single mix included an additional chorus just after the second chorus. There was also an extended remix, entitled 'Alternative Hounds Of Love'.
A live version appears on the album Before The Dawn.

The music video (directed by Bush herself) was very much inspired by Alfred Hitchcock's film 'The 39 Steps'. 'Hitchcock' also features in the video (a nod to the director's famous cameo appearances in his movies).

Kate about 'Hounds Of Love'

['Hounds Of Love'] is really about someone who is afraid of being caught by the hounds that are chasing him. I wonder if everyone is perhaps ruled by fear, and afraid of getting into relationships on some level or another. They can involve pain, confusion and responsibilities, and I think a lot of people are particularly scared of responsibility. Maybe the being involved isn't as horrific as your imagination can build it up to being - perhaps these baying hounds are really friendly. (Kate Bush Club newsletter, 1985)

The ideas for 'Hounds Of Love', the title track, are very much to do with love itself and people being afraid of it, the idea of wanting to run away from love, not to let love catch them, and trap them, in case th hounds might want to tear them to pieces and it's very much using the imagery of love as something coming to get you and you've got to run away from it or you won't survive. (Conversation Disc Series, ABCD012, 1985)

When I was writing the song I sorta started coming across this line about hounds and I thought 'Hounds Of Love' and the whole idea of being chasing by this love that actually gonna... when it get you it just going to rip you to pieces, (Raises voice) you know, and have your guts all over the floor! So this very sort of... being hunted by love, I liked the imagery, I thought it was really good. (Richard Skinner, 'Classic Albums interview: Hounds Of Love'. BBC Radio 1 (UK), 26 January 1992)

In the song 'Hounds Of Love', what do you mean by the line 'I'll be two steps on the water', other than a way of throwing off the scent of hounds, or whatever, by running through water. But why 'two' steps?
Because two steps is a progression. One step could possibly mean you go forward and then you come back again. I think "two steps" suggests that you intend to go forward.
But why not "three steps"?
It could have been three steps - it could have been ten, but "two steps" sounds better, I thought, when I wrote the song. Okay. (Doug Alan interview, 20 November 1985)

When I was a child:
Running in the night,
Afraid of what might be

Now hounds of love are hunting.
I've always been a coward,
And I don't know what's good for me.

Here I go!
It's coming for me through the trees.
Help me, someone!
Help me, please!

Take my shoes off,
And throw them in the lake,
And I'll be
Two steps on the water.

I found a fox
Caught by dogs.
He let me take him in my hands.

His little heart,
It beats so fast,
And I'm ashamed of running away

From nothing real--
I just can't deal with this,
But I'm still afraid to be there,

Among your hounds of love,
And feel your arms surround me.
I've always been a coward,
And never know what's good for me.

Oh, here I go!
Don't let me go!
Hold me down!
It's coming for me through the trees.
Help me, darling,
Help me, please!

Take my shoes off
And throw them in the lake,
And I'll be
Two steps on the water.

Take your shoes off
And throw them in the lake!