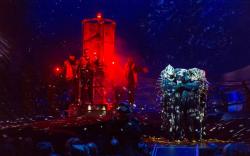 Song written by Kate Bush. Originally released on her fifth studio album Hounds Of Love. Sixth track of The Ninth Wave suite. The choral section, performed by the Richard Hickox Singers, is taken from a Georgian folk song called 'Zinzkaro' ('By The Spring'), which Kate heard performed by the Vocal Ensemble Gordela on the soundtrack of Werner Herzog's 1979 film Nosferatu The Vampyre. The lyric translates as:

The song was used in an episode of the American TV series Miami Vice.

In 2014, Kate performed 'Hello Earth' live during all the shows of Before The Dawn.

'Hello Earth' was covered by Theo Bleckmann,  The Sandman's Orchestra,  TM Collective and Larry Wish.
Samples from 'Hello Earth' were used in the intro of the track Hyperspeed (G-Force Part 2) by The Prodigy.

'Hello Earth' was a very difficult track to write, as well, because it was... in some ways it was too big for me. [Laughs] And I ended up with this song that had two huge great holes in the choruses, where the drums stopped, and everything stopped, and people would say to me, "what's going to happen in these choruses," and I hadn't got a clue.
We had the whole song, it was all there, but these huge, great holes in the choruses. And I knew I wanted to put something in there, and I'd had this idea to put a vocal piece in there, that was like this traditional tune I'd heard used in the film Nosferatu. And really everything I came up with, it with was rubbish really compared to what this piece was saying. So we did some research to find out if it was possible to use it. And it was, so that's what we did, we re-recorded the piece and I kind of made up words that sounded like what I could hear was happening on the original. And suddenly there was these beautiful voices in these chorus that had just been like two black holes.
In some ways I thought of it as a lullaby for the Earth. And it was the idea of turning the whole thing upside down and looking at it from completely above. You know, that image of if you were lying in water at night and you were looking up at the sky all the time, I wonder if you wouldn't get the sense of as the stars were reflected in the water, you know, a sense of like, you could be looking up at water that's reflecting the stars from the sky that you're in. And the idea of them looking down at the earth and seeing these storms forming over America and moving around the globe, and they have this like huge fantasticly overseeing view of everything, everything is in total perspective. And way, way down there somewhere there's this little dot in the ocean that is them. (Richard Skinner, 'Classic Albums interview: Hounds Of Love. Radio 1 (UK), aired 26 January 1992)

"Columbia now nine times the speed of sound."
"Roger that, Dan, I've got a solid TACAN
locked on, uh, TACAN twenty-three."
"The, uh, tracking data, map data and pre-planned
trajectory are all one line on the block"
"Roger your block decoded"

Peek-a-boo,
Peek-a-boo, little Earth.
With just my heart and my mind
I can be driving,
Driving home,
And you asleep
On the seat.

I get out of my car,
Step into the night
And look up at the sky.
And there's something bright,
Travelling fast.
Look at it go!
Look at it go!

Watching storms
Start to form
Over America.
Can't do anything.
Just watch them swing
With the wind
Out to sea.

Go to sleep, little Earth.
I was there at the birth,
Out of the cloudburst,
The head of the tempest.
Murderer!
Murder of calm.
Why did I go?
Why did I go?