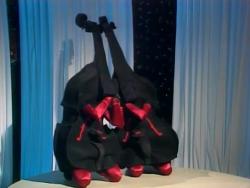 Screenshot from the Christmas special 'Kate'

The Gymnopédies, published in Paris starting in 1888, are three piano compositions written by French composer and pianist Erik Satie. He claimed that they were inspired by reading Gustave Flaubert's novel 'Saiammbô'. They were the first compositions with which Satie tried to cut himself loose from the convential 19th century salon music environment of his father and stepmother. Satie, who was in his early twenties at the time, had just moved from his father's residence to lodgings in Montmartre and had already started an enduring friendship with the romantic poet Patrice Contamine. When Gymnopédie No. 1 was published in August 1888, it was accompanied by a verse written by Contamine.

The melodies of the three Gymnopédies use deliberate, but mild, dissonances against the harmony, producing a piquant, melancholy effect that matches the performance instructions, which are to play each piece "painfully", "sadly" or "gravely".

Kate Bush used part of the first Gymnopédie in her Christmas special Kate, as an intermezzo between the songs Violin and Symphony In Blue.