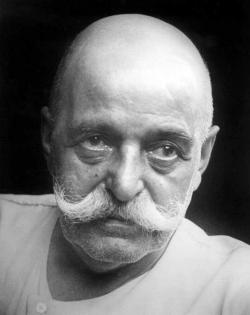 George Ivanovich Gurdjieff was born somewhere between 1866 and 1877 as the son of a Caucasus Greek father and an Armenian mother in Alexandropol (now Gyumri, Armenia), then part of the Russian Empire in the Transcaucasus. Although the dates of his birth vary, the year of 1872 is inscribed in a plate on the grave-marker at the Cimetière d'Avon, in the Prefecture of Paris, France.

The young Gurdjieff avidly read Russian-language scientific literature. Influenced by these writings, and having witnessed a number of phenomena he could not explain, he formed the conviction that there existed a hidden truth not to be found in science or in mainstream religion. As a young adult, he started travelling to Central Asia, Egypt, Iran, India, Tibet and Rome, before returning to Russia for a few years in 1912. In his book 'Meetings with remarkable men', consisting of reminiscences of 'seekers of truth' he met during his travels. He asserts that he has encounters with dervishes, fakirs and with descendents of the extinct Essenes, whose teaching had been, he claimed, conserved in a monastery at Sarmoung. The book also has an overarching quest narrative, involving a map of "pre-sand Egypt," and culminating in an encounter with the "Sarmoung Brotherhood", an organisation which has never been definitively identified and which historian Mark Sedgwick has described as "overtly fictional" and "entirely imaginary."

Following the Russian Revolution of 1917, Gurdjieff moved to Tiflis, Georgia, where he opened the Institute for the Harmonious Development of Man in 1919. A few years later, Gurdjieff settled in France, where his institute took shape once more. From his base at the Château du Prieuré, near Fontainebleau, Gurdjieff shared his new philosophy. He believed that man was in an almost constant sleep state, and that people must work to revive themselves in order to regain the higher consciousness that they are capable of. He also averred that the sleep state made people easy to manipulate, and therefore needed to question everything. At Fontainebleau, Gurdjieff often required people to listen to his writings as they were read aloud. People at the center also performed exercises and dance movements, sometimes to music created by Gurdjieff and composer Thomas de Hartmann.

Gurdjieff's 'system' was a doctrine embodied in 100 sacred dances and in his 1238 page epic 'Beelzebub's Tales to his Granson'. He developed a special vocabulary of his own in some of his writings, using words such as "blastegoklornian." For his disciples, these words increased his aura of deep understanding and mystery. For Gurdjieff's detractors, they made his writings even more nonsensical.

Gurdjieff continued teaching even after his Fontainebleau center closed its doors in 1933. He remained in Paris during World War II, surviving under the German occupation. On October 29, 1949, in Neuilly, France (near Paris), he died at the approximate age of 83.

Kate Bush named Gurdjieff in the lyric of her song Them Heavy People: 'They open doorways that I thought were shut for good / They read me Gurdjieff and Jesu.'