Glory Of Gershwin (the) 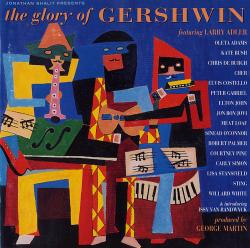 The album 'The Glory Of Gershwin'

Compilation album, released on 29 August 1994, celebrating the 80th birthday of Larry Adler, one of the world's most skilled harmonica players. The album was produced by George Martin and featured several famous pop artists performing Gershwin songs. Kate's contribution actually featured Adler himself and was a cover of the song The Man I Love. That track was released as a single.