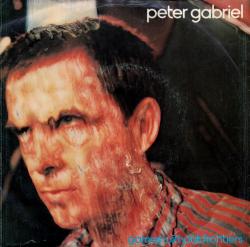 Song written by Peter Gabriel. Originally released on his third self-titled solo album in 1980. Also released as a single from the album in February 1980. The song's lyrics are interpreted as a commentary on war and international diplomacy being like children's games. The track features Kate Bush on backing vocals, singing 'Jeux sans frontières', which is the title of the song in French, but also a reference to a European game show which ran from 1965 to 1999.

There are actually two versions of the original track. The album version of the song includes the line "Whistling tunes we piss on the goons in the jungle" after the second verse and before the second chorus. This was replaced for the single release with a more radio-friendly repeat of the line "Whistling tunes we're kissing baboons in the jungle" from the first chorus. There was also a German version, entitled 'Spiel Ohne Grenzen', in which the backing vocals by Kate are unchanged.
On the B-side of Peter Gabriel's 1992 single 'Steam', there was a remix version of 'Games Without Frontiers' created by Massive and Dave Bottrill.
And finally, in 2010, there was a remix contest where stems of the song could be downloaded and contestants could create their own remixes of 'Games Without Frontiers'.

'Games Without Frontiers' was released as a 7" single only.