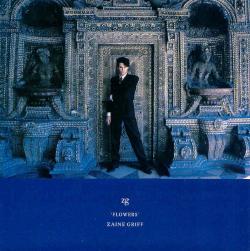 Song written by Zaine Griff. Released on Zaine Griff's second album 'Figures' (1982). The lyrics explicitly refer to the theatre play 'Flowers', written by Jean Genet and is meant to be a tribute to his old mime and movement teacher, Lindsay Kemp, who produced the play during the Seventies. Zaine asked Kate to sing backing vocals on this song, and she did.

Zaine had written a song for Lindsay Kemp called 'Flowers', and he asked me to sing B.V.s. It is a really lovely song. Zaine and I met years ago at Lindsay's classes, and as Lindsay was such a powerful influence on us both - as he is on anyone who is captured by his strong magic - it was a real pleasure to be a part of something dedicated to him. (Kate Bush Club newsletter, 1984)