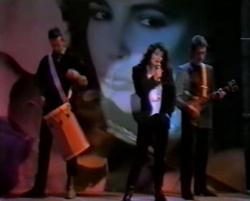 Kate Bush performing 'Running Up That Hill' on Extratour, 5 September 1985.

Extratour was a music and comedy programme, broadcast live from Radio Bremen between 17 January 1985 to 13 April 1989. The show was directed by Michael Leckebusch. Among the presenters were Margarethe Schreinemakers and Stefan Viering. Christian Berg and Michael Geyer were on the road as reporters and worried about curious things such as the reading of the Christmas cards shortly before Christmas in the Post distribution center. The comedy inserts mostly consisted of political cabaret. Among other things, the cabaret artist Bruno Jonas had his place here.

Musical guests were predominantly at that time stars of the hitparades such as Depeche Mode, Tiffany and T'Pau.
Kate Bush appeared in the programme on 5 September 1985 for a short lipsynched performance of Running Up That Hill.