Still from the music video for 'Experiment IV' 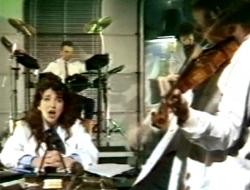 Song written by Kate Bush. Originally released as a single on 27 October 1986, ahead of the compilation album The Whole Story, where it was one of two new recordings and the only new song. The song tells a story about a secret military plan to create a sound that is horrific enough to kill people.

There are three versions of 'Experiment IV': the single version, the video version and the 12" mix.

The music video, directed by Kate, for the song adapts the "storyline" of the song and chronicles the destruction of a secret military installation by a creature made of sound. The science fiction film-in-miniature includes appearances from Dawn French, Hugh Laurie, Gary Oldman, Richard Vernon, Peter Vaughan and Del Palmer. Kate appears on screen as an orderly officer serving tea, as the sound creature and at the end entering a van.
The set was an old military hospital near Blackheath which was actually designed by Florence Nightingale.
The video was banned from Top of The Pops because it was considered too violent. The music video was nominated for the Best Concept Music Video at the 1988 Grammy Awards.

Kate performed 'Experiment IV' on the BBC television programme Wogan on October 31, 1986. The elaborate set featured a desk with paperwork, at least two Fairlight CMI's and the KT Bush band dressed in lab coats. Midway through the song the violinist Nigel Kennedy appears to play his solo. Although this is a lipsynch performance, great care and preparation was taken to make this a visually appealing performance.

This was written as an extra track for the compilation album The Whole Story and was released as the single. I was excited at the opportunity of directing the video and not having to appear in it other than in a minor role, especially as this song told a story that could be challenging to tell visually. I chose to film it in a very handsome old military hospital that was derelict at the time. It was a huge, labyrinthine hospital with incredibly long corridors, which was one reason for choosing it. Florence Nightingale had been involved in the design of the hospital. Not something she is well known for but she actually had a huge impact on hospital design that was pioneering and changed the way hospitals were designed from then on.
The video was an intense project and not a comfortable shoot, as you can imagine - a giant of a building, damp and full of shadows with no lighting or heating but it was like a dream to work with such a talented crew and cast with Dawn French, Hugh Laurie, Peter Vaughn and Richard Vernon in the starring roles. It was a strange and eerie feeling bringing parts of the hospital to life again. Not long after our work there it was converted into luxury apartments. I can imagine that some of those glamorous rooms have uninvited soldiers and nurses dropping by for a cup of tea and a Hobnob.
We had to create a recording studio for the video, so tape machines and outboard gear were recruited from my recording studio and the mixing console was very kindly lent to us by Abbey Road Studios. It was the desk the Beatles had used - me too, when we’d made the album Never For Ever in Studio Two. It was such a characterful desk that would’ve looked right at home in any vintage aircraft. Although it was a tough shoot it was a lot of fun and everyone worked so hard for such long hours. I was really pleased with the result. (KateBush.com, February 2019)

We were working secretly
For the military
We only know in theory
What we are doing:
Music made for pleasure
Music made to thrill
It was music we were making here until

But they told us
All they wanted
Was a sound that could kill someone
From a distance
So we go ahead,
And the meters are over in the red
It's a mistake we've made

And the public are warned to stay off