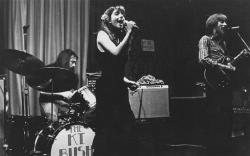 Rare photograph of the KT Bush Band in 1977

Song written by John Lennon, but credited to Lennon-McCartney. The song was inspired by Timothy Leary's campaign for governor of California against Ronald Reagan, which promptly ended when Leary was sent to prison for possession of marijuana. According to Lennon, "The thing was created in the studio. It's gobbledygook; 'Come Together' was an expression that Leary had come up with for his attempt at being president or whatever he wanted to be, and he asked me to write a campaign song. I tried and tried, but I couldn't come up with one. But I came up with this, 'Come Together', which would've been no good to him - you couldn't have a campaign song like that, right?"

Kate Bush performed the song with her own KT Bush band in March 1977. Gigging around the pubs of south London in a Hillman Imp and Morris 1000 van, she performed a set that included songs like the this song, 'Come Together'. Vic King, who played drums in the band, later reflected: "Kate didn’t frequent pubs, but she wanted to do it because she had to learn stage presence and projection. She wasn’t doing it because she loved being on stage."