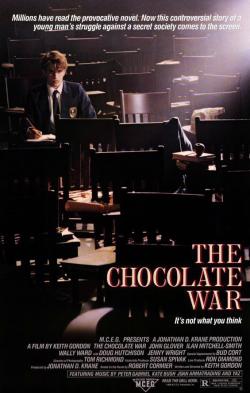 The film offers a portrait of the hierarchical structure, both formal and informal, of a Catholic boys' school. New student Jerry Renault (Ilan Mitchell-Smith) must submit to the bizarre rituals of his peers and the expectations of the school's administration by selling chocolates for the school's annual fund-raising event. The sadistic headmaster, Brother Leon, and 'The Vigils', a viscious gang of school thugs, make Jerry's life hell when he decides he won't be pushed around anymore.

The film had a paltry music budget of about $15,000. Most of the artists featured on the soundtrack allowed the filmmakers to use their songs inexpensively. David Bowie, however, asked for $100,000 to utilize his song 'Heroes' during the final scene and credits, so Kate Bush's Running Up That Hill was used instead.